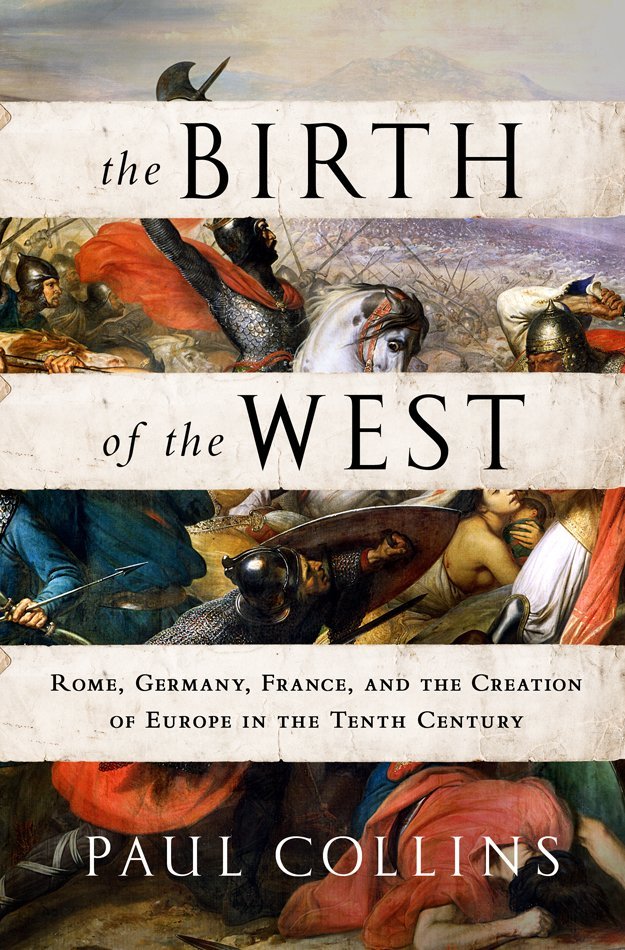 Several weeks ago I mentioned a Big Fat History Book that had me gasping at my own ignorance. I left you dangling, but now that the review has appeared in Shelf Awareness for Readers, I can share the details with you.

The Birth of the West: Rome, Germany, France, and the Creation of Europe in the Tenth Century resembles the world that it describes. Former priest Paul Collins’ broad-brushed history is fascinating, complicated, messy, occasionally confusing and dominated by a fundamentally Catholic world-view.

Collins chronicles both the dissolution of order after Charlemagne‘s death and the first steps toward its return. He begins with an Irish monk’s fears of Viking attacks in the mid-ninth century, ends with widespread apprehension at the close of the first Christian millennium, and offers few peaceful moments in between. Tenth century Europe was under attack from within and without. Charlemagne’s empire collapsed into political chaos as his descendents fought for control over smaller and smaller kingdoms. The Latin church was both a unifying force in a troubled world and a political weapon for ambitious princes and warlords. Viking, Magyar, and Saracen invaders were a constant threat to what little stability existed.

The first three sections of the book are a historical page-turner. Two-thirds of the way through, Collins abandons his action-packed account of state-building, backstabbing, and political and religious intrigue and makes a thematic and stylistic detour to discuss everyday life in tenth century Europe. Several chapters later, he returns to politics and religion, this time focusing on two major figures from the end of the century: Gerbert, later Pope Sylvester II, and Holy Roman Emperor Otto III.

Structural problems aside, The Birth of the West is an engaging account of an often-overlooked era.