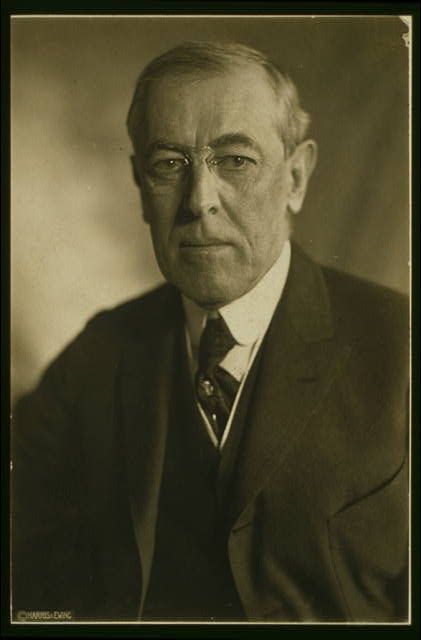 Recently I’ve been working on a piece on Woodrow Wilson.* I plunged into the piece with two facts** and a general impression of stiff-spined moral rectitude.

I soon discovered that Wilson, like all of us, was a man of contradictions. A respected scholar who could not read until he was eleven. A college president who dropped out of school–twice–and talked his way into his PhD without meeting the formal requirements. A dignified (maybe even dour) man with a taste for limericks, a love of singing, and a self-confessed eye for a pretty girl. A Southerner whose childhood experience of Reconstruction shaped his vision of peace after World War I. A reformer whose progressive record is marred by his administration’s abysmal performance on racial issues. A man who won a Noble Peace Prize for what he believed was his greatest failure.

Here are some of my favorite bits about Wilson that didn’t make it into the article:

* Coming soon to an issue of History Channel magazine.
**Fact 1:Wilson was the president of Princeton before he became president of the United States.  Fact 2: Wilson was a zealous promoter of  a just peace after the end of World War I, including the creation of the League of Nations.***
***A great deal of what I knew about both the rectitude and Wilson’s aims for peace after World War I came from one of my favorite novels, Christopher Morley’s The Haunted Bookshop. Much as I love Morley’s book, A. Scott Berg’s recent bio, Wilson, is a much better source–and just as readable
****Not a new genre evidently.

Photograph courtesy of the Library of Congress. Digital archives rule!