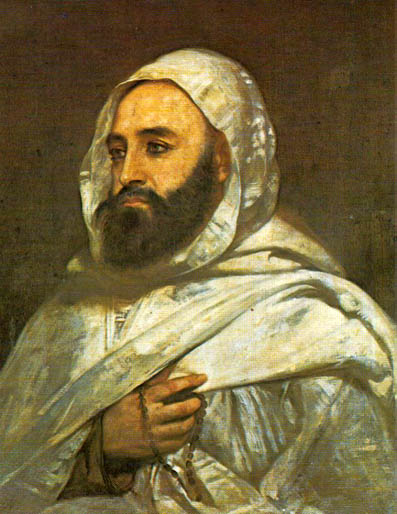 If the French hadn’t invaded Algeria in 1830, Algerian emir Abd al-Qadir would probably have been content to follow his grandfather and father as the spiritual leader of the Qadiriyah Sufi order. In the fall of 1832, when the French began to expand their control into the Algerian interior, the Arab tribes of Oran elected al-Qadir as both the head of the Qadiriyah order and as their military leader.

Al-Qadir led Arab resistance against French expansion in North Africa from 1832 to 1847. He was so successful that at one point two-thirds of Algeria recognized him as its ruler. The French signed treaties with al-Qadir and broke them. (Similarities to the United States’ relationship to its native peoples, anyone? ) After a crushing defeat in 1843, he was hunted across North Africa as an outlaw.

Abd al-Qadir surrendered at the end of 1847 and was imprisoned in France until 1853. Following his release, he settled in Damascus, where he entered the stage of world history one last time. In 1860, the Muslims of Damascus rose and began slaughtering the city’s Christians. When the Turkish authorities did nothing to stop the massacre, Abd al-Qadir and 300 followers rescued over 12,000 Christians from the massacre. Once hunted by the French as a dangerous outlaw, Abd al-Qadir received the Legion of Honor from Napoleon III for his efforts.