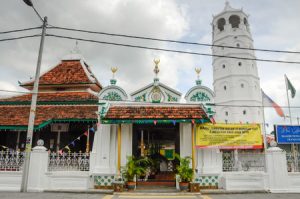 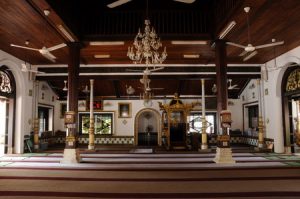 Nothing about the Tengkera Mosque of Malacca City says “Islam” to a Western observer. Its three-tiered roof and elaborate entrance gate would be at home in any Chinatown in America. The freestanding octagonal tower looks more like a pagoda than a minaret. Built in 1728, the Tengkera Mosque reflects the melting pot character of the Melaka Sultanate during its heyday.

The city of Melaka was founded in 1402 by a fugitive Hindu prince from Sumatra who subsequently converted to Islam to please a powerful father-in-law. Prince Paramesvara chose his location well. He built his new city on the deepest natural port on the Straits of Melaka, which controlled the trade routes between India and China. By the end of the fifteenth century, Melaka had become an important international trading hub, home to merchants from China, Sumatra, India, and the Middle East.

As the city grew, the size of its foreign immigrant community increased. Each group of immigrants brought new building materials, construction techniques, and architectural styles with them. The result was a building style that one architectural historian has called “Straits Eclectic”: traditional South East Asian timber architecture with Indian and Chinese accents.

Unlike their counterparts in the Middle East and India, the Melaka sultans did not build monumental state mosques. The earliest mosques in the region were nothing more than a pavilion on a raised platform with a thatched roof and one solid wall on the side that faced toward Mecca. Over time, the pavilion developed into a small square building topped with a steeply pitched three-tier tile roof.

In many ways, the final form of the Melaka-style mosque is nothing more than a pavilion with a Chinese party hat. Each tier of the roof is supported by a square of wooden pillars, with the prayer hall centered under the top tier of the roof. The wall of the prayer hall that faces toward Mecca is always solid but the other walls are often nothing more than an open row of pillars. Often there is an open space between roofs to allow air to circulate. On the exterior, the tile roofs sweep upward and end in an elaborate finial.

An elegant solution for a climate very different from the Arabian deserts where Islam was born.