Guerrilla tactics are probably as ancient as war itself. The word itself dates from the Napoleonic wars, a product of the Peninsular War of 1808-14 in Spain—the most prolonged and, with the exception of Napoleon’s invasion of Russia, most destructive campaign of the period.

Napoleon’s invasion of Spain had its official roots in long-simmering tensions between King Carlos IV of Spain and his son Ferdinand. (Though it’s hard to believe that Napoleon wouldn’t have invaded eventually even without an excuse.) Fearful that his father intended to remove him from the succession, Ferdinand asked for help from Napoleon in deposing his father.*

Carlos IV and his wife were not popular with their subjects. In March 1808, a popular uprising forced Carlos to abdicate in favor of Ferdinand. The new king arrived in Madrid on March 24, one day after the French commander Joachim Murat entered the city at the head of the French army. Popular feeling against Carlos IV’s corrupt government was so strong that many Spaniards greeted the French as liberators.

By the end of April, it was clear that the French had come to conquer Spain, not to liberate it. Both Carlos and Ferdinand, held captive in the French city of Bayonne, abdicated. By the time Napoleon named his brother Joseph the king of Spain on May 10, the country had already risen in rebellion. 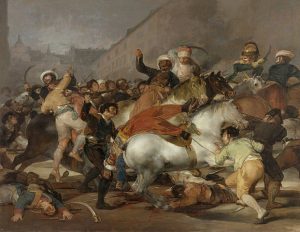 Francico Goya. The Second of May 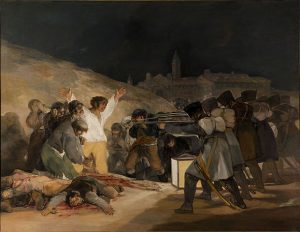 Francisco Goya. The Thrid of May

On May 2, rumors began to spread that the French planned to forcibly remove the remaining members of the royal family to Bayonne. Violent protests erupted in Madrid. A Mamluke cavalry unit, a souvenir of Napoleon’s invasion of Egypt,** charged the protesting crowd, which was armed with little more than cudgels and knives.*** Once the protestors were dispersed, Murat’s men rounded up everyone they could find who was armed. Executions lasted through the night and well into the morning.

The brutal repression of the May 2 protest fueled Spanish resistance. For six years, Spanish patriots, men and women alike, fought against the French occupiers in small irregular bands and provided critical support to the British Army in the Peninsular War against France. They were termed guerrillas—a diminutive of the Spanish word for war, guerra.

*This should be filed in the Big History Binder labeled “what were they thinking???”
**More useful than a t-shirt or a scale-model of the Pyramids.
***Unfortunately, variations on this show up more in history with some regularity. And not just in the distant past. Or in other countries.

Posted in Military History, Revolutions, The Long Eighteenth Century, Word With a Past and tagged Napoleonic wars, the long 18th century, word with a past