My Own True Love and I are coming to the end of a week on the Great River Road.  We drove north through Wisconsin and Minnesota to Lake Itasca State Park and the headwaters of the Mississippi.  Since then we’ve been working our way south on back roads that follow, cross, and re-cross the Mississippi.  We’ve stopped at anything that caught our imagination, including big boots and big fish, historical markers, and a cafe with a reputation for good pie. 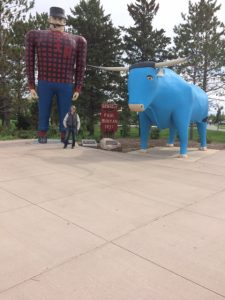 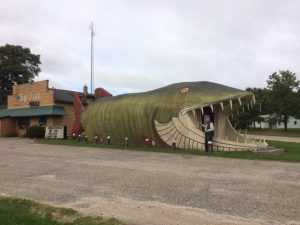 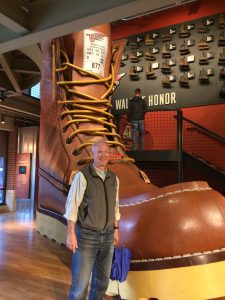 I’m collecting stories like crazy for you, but so far I haven’t had time to turn my notes into blog posts.

In the meantime, I thought you might enjoy this blog post from 2014, when we took our first stab at traveling the Great River Road.

A while back, My Own True Love and I had to abandon our plans to take a three week drive down the Great River Road, which winds from Minnesota to Louisiana along the Mississippi. This last weekend we treated ourselves to four days and the brief stretch of the river that runs along the edge of Illinois from Nauvoo to Quincy. Instead of roots music, regional food, and lots of historic sites, we had a home-grown musical, a Maid-Rite sandwich, missing (or at least elusive) historical markers, and lots of Mormons.

We spent most of our time at Nauvoo, where the Mormons built a thriving community from 1839 to 1846, after being driven out of Missouri. They spent a number of years in Nauvoo before once again being driven out, this time making the trek across the plains to Utah. Today, Nauvoo is effectively a Mormon pilgrimage site.

There are two different clusters of sites commemorating the Mormon history of Nauvoo, run by two different off-shoots of Joseph Smith’s original congregation. The Church of Latter Day Saints offer twenty-some reconstructed buildings and businesses with volunteer docents–the general feel is a small-scale Williamsburg with a Mormon emphasis. The surviving historical sites are in control of the Community of Christ, which broke off from the Latter Day Saints in the early 1850s .* Community of Christ volunteers give walking tours of the sites. We left knowing more about Mormon history than we knew when we arrived–and with several big unanswered questions about the relationship between the Mormons and their neighbors in both Missouri and Illinois.

A small but useful exhibit run by the local Chamber of Commerce puts the Mormon years of Nauvoo in a larger context that included a communal settlement of Icarian socialists,** immigrants who fled the 1848 revolutions in Germany, and an engineering project on the Mississippi led by then Lt. Robert E. Lee.

Some of the high points of the trip included:

• A brief ride in an oxen-drawn wagon, with a very knowledgeable guide. We were surprised to learn that oxen are simply cattle trained as draft animals. Oxen were cheaper and stronger than horses, easier to drive,** and able to feed themselves by grazing on a long trek.
• A living history program about making bricks.
• Driving on a county road along the Mississippi early on a beautiful Sunday morning
• The Villa Katherine in Quincy Illinois: a home built in the Moorish style in 1900 by a man who can most politely be described as an enthusiast.

We’ve got lots of River Road left to travel.

*One of the sources of disagreement was over who was Joseph Smith’s legitimate successor after his murder. The splinter group who became the Community of Christ believed that Smith had anointed his eleven-year-old Joseph Smith III as his successor and were prepared to wait until he had grown old enough to take his rightful place. This reminded me of the Sunni/Shia split over Mohammed’s successor. Déjà vu all over again?

**Worth a blog post of their own. Coming soon to a history blog near you.  [NOTE:  Still no blog post on the Icarians.  So many stories, so little time.]

***As long as they’d been trained to yoke. If you were desperate and hooked an untrained pair of cattle to a yoke, you were asking for trouble.