As you know if you’ve been reading along, My Own True Love and I just drove a portion of the Great River Road. Several years ago we drove the southern leg of the road, traveling south from Memphis  to the point on the Gulf where the road dead-ends in chain link fences and industrial parks and then circling back north until we reached Vicksburg. (1)

This time we headed north. We made a mad-dash on the expressway through Wisconsin and Minnesota, resolutely ignoring the siren call of sites of historical interest along the way. (2) The real adventure began when we reached Lake Itasca State Park, home of the headwaters of the Mississippi.

Itasca Lake State Park was founded in 1891 thanks to the efforts of local conservationists (3) and “developed” by Civilian Conservation Corps (CCC) workers during the Depression. 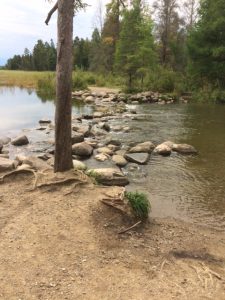 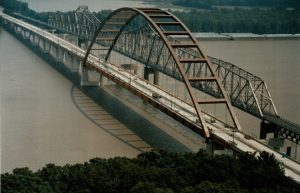 The central experience of the park is seeing the Mississippi at its source, where the river is narrow enough that we could have waded across if we had planned better and brought the right shoes.  It was unexpectedly thrilling. (My personal image of the Mississippi is driving across the river at St. Louis on the Jefferson Barracks Bridge. The transition is one of the constants of my adult life: the moment in the drive home to the Ozarks when the landscape begins to look like home. Big difference.)

But there is more to the park than the river. Two visitors’ centers tell the story of the park and the land that comprises it from very different perspectives. The visitor’s center at the north entrance, nearest the headwaters, tells how the land was formed, describes how watersheds work in the landscape, and gives an overview of the flora and fauna of the region. The center at the south entrance looks at the region’s history in several different ways, including a smaller version of the natural history of the park, the “search” for the headwaters of the Mississippi, and the history of the park itself and the growth of its use as a resort.

One story in particular caught my attention: Henry Rowe Schoolcraft’s “discovery” and naming of the headwaters in 1832. (4) When Schoolcraft identified the headwaters,(5) he named the lake from which the river flowed Itasca—an odd contraction of the Latin phrase “veritas caput” (roughly translated as the true source). Not only was the name odd, it was also totally unnecessary. The lake already had a perfectly good name. The Ojibwe called the lake, Omushko, or Elk Lake, based on its shape. The French simply translated that name and called it Lac la Biche, or Elk Lake.

Like the search for the headwaters of the Nile, this was an inherently colonial project. The headwaters were not lost. The Native American peoples of the region knew where the water poured from the lake into the river. (As evidenced by the fact that Schoolcraft hired an Ojibwe guide,  to lead his 30-man expedition.) So did eighteenth century European fur traders. Renaming was a way of claiming.

The story gets odder yet. Over time, Schoolcraft developed a reputation as an expert on the Ojibwe culture and language. (6) In one of his books on Ojibwe culture, he told the story, which he attributed to Ozaawindib, of a broken-hearted “Indian maiden” (a phrase that raises red flag as far as I’m concerned) named Itasca whose tears fed the headwaters of the great Mississippi. I have my doubts.

(3) It wasn’t a slam dunk. Logging was a powerful industry in early Minnesota and the area around Lake Itasca was prime logging country. The bill passed the Minnesota legislature by one vote.
(4) The Schoolcraft story as presented here relies not only on information from the state park but from several other historical sites that we visited. One of the delights of this trip was the way common themes appeared over the course of the week.
(5) Accompanied by a thirty-men expedition led by an Ojibwe guide named Ozaawindib.  Exploration is not a one-man operation, even though one man usually gets sole credit.

(6)Due in large part to his wife, Jane Johnston, an educated woman of Ojibwe and Scots-Irish heritage who “helped” Schoolcraft collect information about the languages, history, and customs of the Native American tribes of the Great Lakes region, where he served as an agent for the Department of Indian Affairs.