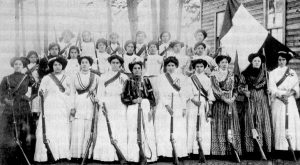 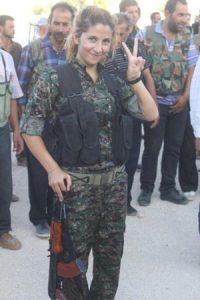 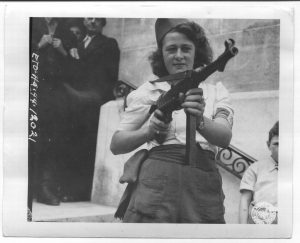 Political coups, revolutions, and resistance movements against an occupying army or colonial government created women warriors in many times and places. Some achieved the status of national heroine—think Joan of Arc or the Trung sisters of Vietnam. But for every national heroine, there were hundreds of women warriors whose service to their country or cause is remembered as part of a largely anonymous collective. The resistance. The “guerrilla girls” of Zimbabwe. The “long-haired” army.

Women fought in revolutions against Spanish control throughout Latin America in the early nineteenth century and against internal tyranny in the twentieth century. Female slaves battled for their personal as well as their national independence in the Haitian Revolution of 1802. Partisanas took up arms in the Spanish Civil War and the anti-Nazi resistance movements in France, Greece, Italy, and Yugoslavia during World War II (1) Women fought in the anticolonial wars that followed the Second World War. In Vietnam, members of the so-called “long-hair army” were guerrilla fighters, served in antiaircraft artillery units, and fought in local militia units in Vietcong-controlled areas in South Vietnam. In the 1950s, Kikuyu women served with the forest combat forces of the Mau Mau rebellion in Kenya, and Muslim women fought in the Algerian wars for independence. Thousands of women joined the guerrilla armies of the late twentieth-century revolutions in Africa, Asia, and Latin America—making up perhaps as much as 30 percent of these forces. (2) Beginning in 2014, between seven thousand and ten thousand Kurdish women joined the ongoing fight against ISIS in the Middle East. That same year, the so-called “invisible battalion” of women in the Ukrainian army became unacknowledged combatants in anti-terrorist operations in the undeclared war with Russia. (3)

Gender, peace and security specialist Nicola Popovic calls them the F-words: female freedom fighters.  And like other F-words, their use is circumscribed by social norms.  Such women are the subject of growing numbers of academic monographs but they tend to get overlooked in big picture accounts of the conflicts in which they serve.  Here’s hoping that changes.

(1)A large percentage of the women involved in resistance movements in World War II were not warriors per se, though their jobs were as dangerous as those of their armed counterparts. Because women could move more freely, they carried out critical activities that allowed the armed resistance movements to function. They acted as couriers, collected intelligence, and arranged for food, supplies, and shelter for armed insurgents and downed Allied pilots. They transported weapons and ammunition and distributed illegal printed materials, sometimes using the trappings of pregnancy and motherhood to help them smuggle contraband under the eyes of German soldiers. Without them, the armed groups could not have carried out their actions, yet historians often describe their work as “passive resistance.” They may not have been warriors by conventional definitions, but they were not passive in any reasonable sense of the term.

(2) Thirty percent seems to be the canonical estimate of the female component of any revolutionary force from the end of the eighteenth century through yesterday—suggesting it may be no more reliable than troop estimates in the ancient world. Perhaps it tells us as much about the desires and perceptions of those who report them as it does about the actual number of female combatants. To put this number in context, according to the White House Project: Benchmarking Women’s Leadership, women on active duty made up 14.3 percent of the American military in 2008. The percentages of women in the military in France, Germany, and the United Kingdom for the same year were 14.6, 8.3, and 9.3, respectively.

(3) The “invisible battalions” became somewhat less invisible in 2017, with the release of an eponymous documentary film and companion report funded by the Ukrainian Women’s Fund.

Just a reminder: Pre-order swag for Women Warriors is now available! If you buy the book before February 26 and want women warrior trading cards, a book mark and a signed bookplate, fill out this form: www.beacon.org/warriorspreorder

Just so there’s no confusion:
1. You don’t have to buy the book directly from Beacon: pre-orders from any vendor count
2.  If you already pre-ordered, you can still get the swag.