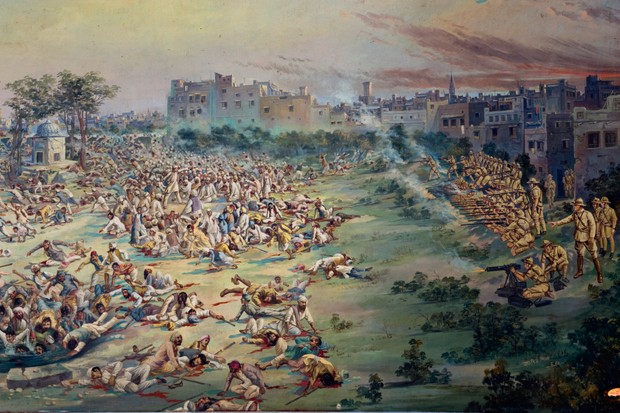 World War I brought India one step closer to demanding its independence from Great Britain.

Indian regiments sailed overseas and fought alongside their Canadian and Australian counterparts. (If you visit the memorial gateway at Ypres, you will see how many of them died in defense of the empire.) Indian nationalists loyally supported the British government during the war, fully expecting that British victory would end with Indian self-rule on the dominion model.

Instead of self-rule, India got repressive legislation. The Rowlatt Acts, passed by India’s Imperial Legislative Council in March, 1919, continued the special wartime powers of the Defense of India Act. The new act took powers originally intended to protect India against wartime agitators–including the right to imprison those suspected of “revolutionary conspiracy” for up to two years without trial–and aimed them at the nationalist movement.

Indian members of the legislative council resigned their seats in protest. Mahatma Gandhi took the protest further, declaring a national day of work stoppage in the first week of April as the first step in a full-scale campaign of non-violent, non-cooperation against the so-called “Black Acts”.

The first implementation of the new laws occurred on April 10 in the Sikh city of Amritsar. The government of the Punjab arrested Indian leaders who had organized anti-Rowlatt meetings and deported them without formal charges or trials. When their followers organized a protest march, troops fired on the marchers, causing a riot. Five Englishmen were killed and an Englishwoman was attacked. (She was rescued from the rioters by local Indians.)

Brigadier General Reginald Dyer was called into Amritsar to restore order. The situation called for diplomacy and good sense. Dyer used neither. On April 13, he announced a ban on public gatherings of any kind. That afternoon, 10,000 Indians assembled in an enclosed public park called Jallianwala Bagh to celebrate a Hindu religious festival. Dyer arrived with a troop of Gurkhas and ordered them to block the entrance to the park. Giving the celebrants little warning and no way to escape, he ordered the soldiers to fire on the unarmed crowd. They fired 1650 rounds in ten minutes, killing nearly 400 people and wounding over 1000.

In Britain, Dyer was widely acclaimed as “the man who saved India.” The House of Lords passed a movement approving his actions. The Morning Post collected £26,000 for his retirement and gave him a jeweled sword inscribed “Saviour of the Punjab.”

The government of India censured Dyer’s actions and forced him to resign his commission, but did nothing to stop local officials from continuing to inflame public opinion. In the Punjab, which remained under martial law for months following the Amritsar massacre, government officials acting “in defense of the realm” repeatedly humiliated and offended the people under their rule with actions such as making Indians crawl through Jallianwala Bagh.

Instead of “saving India”, Dyer accelerated Indian nationalist activity. Many Indians who had previously been loyal supporters of the Raj now joined the Indian National Congress, India’s largest nationalist organization. Bengal poet Rabindranath Tagore resigned the knighthood he had received after winning the 1913 Nobel prize for Literature. Motilal Nehru, president of the Congress and father of the first president of independent India, declared that “all talk of reform is a mockery”. Attempts to become equal partners within the Raj were almost over. Soon the push for independence would begin.