If I were smarter, I’d have written this blog post last week and invited you to attend Books in Bloom, a literary festival in Eureka Springs at which I was a guest speaker on Sunday. Put on by the local library foundation, Books in Bloom is held the third Sunday in May and is a great event for authors and readers alike. Put it on your calendar for next year. I won’t be one of the speakers,* but I have no doubt that there will be someone on the program that you will be eager to hear.

I was on the flight home when it occurred to me that I should introduce you to Eureka Springs, which is one of my favorite places in the world. Here goes: 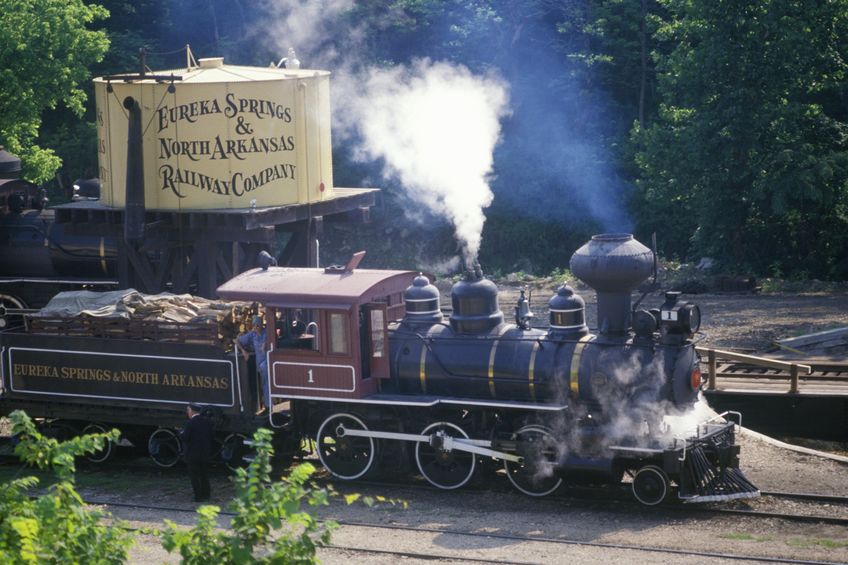 Eureka Springs, Arkansas, has been a tourist destination from the day it was founded in 1879.

The limestone hills on which Eureka Springs is built are riddled with caves, sinkholes, and natural mineral springs. Long before Europeans arrived, the Native American peoples of the area believed in the healing powers of the springs, especially the large spring that became the center of town, known as Basin Spring.

Eureka Springs’ development as a spa town began when Dr. Alvah Jackson discovered the medicinal properties of Basin Spring on a hunting trip in 1858. For years Jackson used water from the spring in his medical practice, selling bottles of it as “Dr. Jackson’s Eye Water”. In the spring of 1879, Jackson brought Judge L.B. Saunders to the spring. Saunders had a painful skin disease that several doctors had been unable to cure. The waters improved the judge’s condition so dramatically that he moved his family to a camp by the spring in May, 1879.

Others soon followed. By summer, hundreds of people had come to the camp town around Basin Spring, drawn by reports of miraculous cures. Named on the 4th of July and incorporated in August, the newly formed town grew quickly. Within a year, Eureka Springs had 4,000 permanent residents (twice the current population) and as many as 15,000 transient visitors.

Retired Civil War general and former Arkansas governor Powell Clayton saw the potential for an elegant resort in the rough boomtown. A civil engineer by training, he founded the Eureka Springs Improvement Company, the Eureka Springs and North Arkansas Railway, and the Crescent Hotel, which was considered America’s most luxurious resort hotel at the time. By the 1890s, Eureka Springs had a permanent population of 10,000. More than 35 luxury hotels, as well as boarding houses, and cottages, were built to house the thousands of visitors who came to take the waters each year.Between 1888 and 1904, several trains each day brought visitors from across the country to take the waters of the sixty-three mineral springs from which the town takes its name. Hundreds reported cures, thanks to the benefits of fresh mountain air, clean spring water, and a regimen that included walking several miles each day up and down the hills of the town.

Today, tourists come to enjoy the charm of Victorian houses built into the side of a mountain, the strong arts community, and what innkeeper Faryl Kaye describes as the town’s “wackiness”.

The elegant spa town of the 1890’s is now a quirky arts colony, defined in large part by its unusual mix of architecture and topography.

*Authors enjoy themselves so much that the festival organizers do not allow speakers to return two years in a row.