Christopher Klein’s When the Irish Invaded Canada: The Incredible True Story of the Civil War Veterans Who Fought for Ireland’s Freedom tells one of those overlooked stories from history that make your jaw drop. 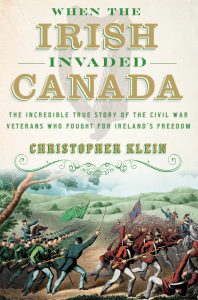 Here’s the short version: A year after the end of the American Civil War, veterans from both the Union and Confederate armies went to war again. Their goal? To seize the British colony of Canada and hold it hostage for until Ireland was given it’s independence.

Klein does a masterful job of first untangling and then weaving together the complex histories of Irish nationalism, Irish immigration to the United States, America’s expansion westward, Canadian unification, and post-Civil War American politics. The resulting story is alternately heartbreaking and hysterical,—and always fascinating.

When did you first learn about the Fenian Raids, and what about the story captured your imagination?
When researching my last book, a biography of the Irish-American heavyweight boxing champion John L. Sullivan, I came across a description of one of Sullivan’s ring opponents as a veteran of the attack on Canada and immediately did a double-take. Like most Americans, I had never heard of the Fenian Raids. The more I delved into this passing message in a book, the more I found that there was an incredible adventure story to be told about a band of revolutionaries who fled Ireland’s Great Hunger after the potato crop failed, fought on both sides of the Civil War, and then united to attack Canada not just once, but five times between 1866 and 1871. It sounds like a bunch of blarney, but it’s one of those stories that only history could concoct. What also drew me into the story of the Fenian Raids was the opportunity to write a prequel of sorts to my Sullivan biography, which chronicled the generation of Irish-Americans born to Great Hunger refugees who rose to political and cultural power during the Gilded Age. When the Irish Invaded Canada tells the story of the previous Great Hunger generation, which encountered the nativist hostility of the Know-Nothings, struggled mightily to assimilate into American culture, and never forgot the plight of their homeland, which had been under British rule for seven centuries.

Were there special challenges in researching what was effectively a series of covert actions?
Luckily for me as a writer—but unfortunately for the Fenian Brotherhood, the organization that carried out the series of attacks—the Irish-Americans who invaded Canada were not particularly adept at keeping their covert operations secret. British and Canadian spies easily infiltrated the Fenian Brotherhood, although, in all honesty, a newspaper subscription was all that was required to stay up-to-date on the comings and goings of the Fenians since they freely exercised their gift of gab. “No news travels so freely or so fast as the ‘secret’ doings of the Fenian Brotherhood,” quipped Mark Twain. “In solemn whisperings at dead of night they secretly plan a Canadian raid, and publish it in the ‘World’ next morning.” Letters, telegrams, and internal communications sent among the Fenians have been preserved in a number of archives in the United States and Canada, which were very valuable in researching the story.

What impact did the failed Fenian Raids have on the broader history of Canada, the United States, Britain, and Ireland?
The Fenian Brotherhood succeeded in bringing self-government to one part of the British Empire—just not the one they intended. In the wake of the 1866 Fenian Raids, Canadians questioned the ability of the British government to defend their southern border from foreign invaders. This spurred on a burgeoning confederation movement that led to the establishment of the Canadian Parliament in Ottawa in July 1867.

As for Ireland itself, the Fenian Brotherhood was the first to organize the Irish diaspora into financial and material support that flowed from America to Ireland. It made the United States a player in Anglo-Irish relations—a role that continues to this day in Northern Ireland—and demonstrated that America could provide Irish republicans with a base of operations beyond the legal reach of the British government. The transatlantic revolutionary framework first established by the Fenian Brotherhood, by which money and arms were raised in America and shipped to Ireland, would prove vital to the 1916 Easter Rising and the eventual establishment of the Irish Free State.

After the Civil War, Anglo-American relations were at their lowest ebb since the Redcoats torched the White House. However, the Fenian Raids saw the dawn of the “special relationship” between the United States and Great Britain as diplomats from the two countries invested considerable time and effort to defuse the tensions between the Fenians and Canadians.

You keep the balance between farce and tragedy beautifully throughout the book.  Is there an event that you found particularly heartbreaking, or alternatively, hysterically funny?
The final Fenian Raid on Manitoba in 1871 is a farce of the highest order. It was led by John O’Neill, who is the thread that stitches together When the Irish Invaded Canada as he had a hand in all of the principal attacks. As a boy growing up in Ireland, O’Neill witnessed firsthand the horrors of the Great Hunger, and at his grandfather’s knee he heard the tales of famous members of the O’Neill clan who dared to stand up and fight the British. O’Neill carried both that inspiration and that trauma with him to America and became one of the most famous Irish-Americans of his age by scoring the first victory by an Irish army over British Empire forces since 1745 at the Battle of Ridgeway. O’Neill would never let go of the idea of invading Canada, no matter how great the odds facing him, even after giving President Ulysses S. Grant his promise to never attack Canada again in return for a pardon. In spite of his pledge, O’Neill led three dozen men on an attack from North Dakota in which he seized a Canadian customs house and an outpost of the Hudson’s Bay Company. However, O’Neill was unaware that the international border had recently been resurveyed and rather than being a quarter mile north inside Canadian territory as he believed, the Fenians were actually three-quarters of a mile south of the border, on American soil. Not only had O’Neill failed to conquer Canada, he failed to even enter it. I still can’t decide whether O’Neill is a character out of a comic opera or a Shakespearean tragedy because he is so blinded by his hatred of the British.

What would you like readers to take away from the book?
I’d like readers to be entertained but also perhaps gain a greater understanding that the assimilation of the Irish into American life was nowhere near as smooth as many people might imagine. I think it’s well known that Irish Catholics who fled to America after the Great Hunger encountered nativist scorn, but the Fenians who attacked Canada were so “radicalized” by their experiences under British rule that even after fighting in the Civil War they viewed themselves as Irish first, American second. Even after being in the country for two decades, these immigrants were still willing to take up arms for their homeland in these spasms of violence.

The Fenians also teach us that you don’t always have a Hollywood ending when facing overwhelming odds, but just because a win is unlikely doesn’t mean that you don’t put up a fight. Fighting a losing battle is still better than putting up no fight at all. Whether it’s the fight for civil rights or against cancer, even if you don’t find success in your lifetime, one of your descendants just might because you kept the cause alive. That was the case with these Fenians. They didn’t see a free Ireland in their lifetimes, but by keeping the revolutionary fire from being extinguished, they passed the torch of freedom onto a subsequent generation that was successful.

What are you working on now?
I’m keeping up my contributions to History.com, the website of the History Channel, and still searching for the right story for the next book I’d like to write. 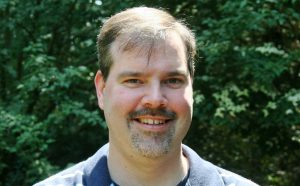 Christopher Klein is the author of four books, including Strong Boy: The Life and Times of John L. Sullivan, America’s First Sports Hero.  A frequent contributor to History.com, Klein has also written for The Boston Globe, The New York Times, National Geographic Traveler, Harvard Magazine, Smithsonian.com and AmericanHeritage.com .  If you want to know more about his work, check out his website: https://christopherklein.com/