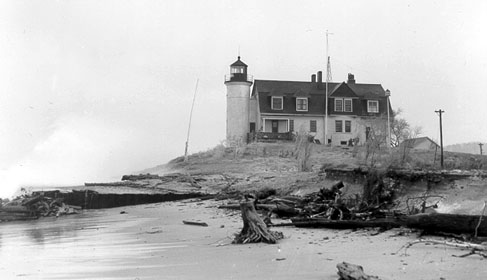 I should begin by pointing out that I do not come from lighthouse country. I knew very little about lighthouses or life saving stations prior to going to the Port Betsie Lighthouse Museum in Frankfort, Michigan. (1) Those of you who are more lighthouse savvy than I am might not learn as much as I did. But based on the reactions of the people I was with, I’ll bet you would learn something.

The Post Betsie lighthouse was built between 1854 and 1858 and went into service in 1859. A life saving station was added to the site in 1876. One of nineteen lighthouses on the northeast shore of Lake Michigan, its purpose was to help ship captains to chart their course through the treacherous Manitou Passage. (3) The light is still active as an unmanned navigational aid, powered by a 40 watt bulb. (Honest!)

The museum has three parts: the restored lighthouse, the Boathouse Museum, and the fog signal building. The exhibits explain how the lighthouse and the life saving station worked in day to day terms, how isolated Port Betsie was from local communities for much of its tenure, and how important the work was, with lots of detail to bring it all to life.

Here are the highlights as far as I’m concerned: 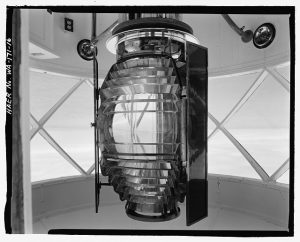 In short, the Point Betsie Lighthouse Museum is definitely worth your time if you are in the area.

(1) My strongest images of lighthouses come from a book I read as a child, that was probably a couple of decades old at the time. A storm, a wreck, a desperate attempt to save an unidentified woman who spoke little English and left behind a violin that the lighthouse keeper’s daughter learns to play. Which of course proves to be a Stradivarius (2) when said daughter goes to New York to pursue a musical career. Resulting in the identification of the dead woman. Does this sound a chord for anyone? Let me know.

(2) As mysterious violins in fiction so often do.

(3) The fact that the passage is now a prime site for shipwreck diving tells you all you need to know.

(4) The answer: very slowly and with a large calm man standing below me. Thank you, Carl!