It’s the Fourth of July weekend here in the United States:  a holiday that expands and contracts depending on where in the week it falls.  It’s a good time to think about the complexity of revolutions in general, and the American Revolution in particular. 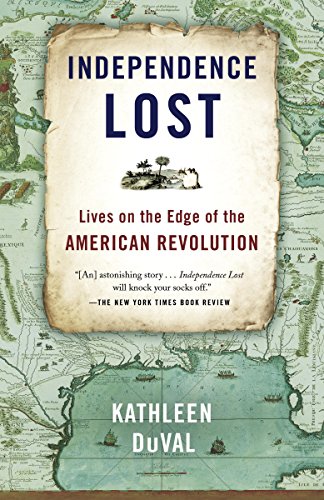 In Independence Lost: Lives on the Edge of the American Revolution, historian Kathleen DuVal reminds us that the revolution was part of a larger global conflict involving France and Spain, and that Britain had 13 other colonies in North America and the Caribbean that were also affected by the war.  She focuses on one in particular:  West Florida.*

At the beginning of the American Revolution, West Florida, which included much of what is now Florida, Mississippi, Alabama and Louisiana, had only recently become a British colony—part of the redistribution of imperial territories at the end of the Seven Years War. Located on the border between the British and Spanish empires, and a distant frontier for both, it was home to former French and Spanish citizens, British loyalists fleeing the disruptions of the revolution and well-organized Indian nations with their own agendas. The possibility of a Spanish invasion was real.

DuVal considers how eight very different colonists–a second-generation African slave, a young Cajun with a deep-seated hatred of the British, leaders of the Creek and Chickasaw tribes and two British couples who chose different sides in the conflict–responded to the dangers and opportunities that the revolution brought to their doorsteps and the impact of those choices. While each of these characters stands in for a larger population, the complicated calculus of self-identity, self-interest and personal history that they use to make decisions about the world around them makes it clear that revolution and politics were always personal.

*You’ve never heard of it?  That’s kind of the point.  Neither had I before I read DuVal.