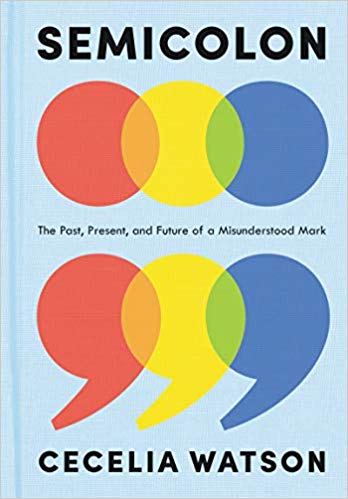 If you’ve read much of my writing, you have probably figured out that I am not a member of the esteemed Semi-colon Haters Society. Personally, I find it a evocative and flexible piece of punctuation. So when I had a chance to review Cecelia Watson’s Semicolon: The Past, Present, and Future of a Misunderstood Mark for Shelf Awareness for Readers, I grabbed it.

It did not disappoint.

On the surface,  Watson’s Semicolon  is a rollicking history of the punctuation mark that people love to hate. She grabbed my attention immediately with the fact that not only had someone invented the semicolon—something that had never occurred to me—but that we know who he was.*

Watson places the semicolon’s creation in the broader context of Italian humanism, when punctuation was still experimental. She considers the fate and creation of other punctuation marks. She discusses the semicolon’s role in a debate over Massachusetts’s liquor laws in the early 20th century–and the larger question of the impact of punctuation on judicial rulings. She outlines arguments used by semicolon-bashers. She reviews historical attempts to define the proper use of the semicolon.

She also examines the different ways in which five skilled and very different writers–Raymond Chandler, Henry James, Herman Melville, Rebecca Solnit and Irving Welsh–use the semicolon in their work. Watson concludes that the semicolon “represents a way to slow down, to stop, and to think.” Alternatively, it can allow a writer to speed up the pace of her text. In short, the role of the semicolon is to measure time in the pursuit of meaning.

Watson’s vision of the semicolon’s purpose points toward a subversive argument that runs alongside her history of its journey from clarity to confusion. She argues that it is impossible to untangle the history of the semicolon from the history of grammar rules and guidebooks. Looking at grammar guidebooks through the lens of the slippery semicolon, she comes to the conclusion that the written rules of language are a barrier to communication rather than a support.

Well worth the read for history buggs and grammar nerds alike.

*Venetian scholar Aldus Manutius (1449-1515). He is best known for producing high-quality, inexpensive pocket-sized editions of Greek and Latin classics—a new idea at the time. In other words, a book lover’s hero.