On the first day of our Great River Road adventure (1), My Own True Love and I veered about 45 miles off the Great River Road so I could sneak in a bit of a research for the book proposal I’m working on at the Vesterheim Norwegian American Museum and Heritage Center  in Decorah, Iowa.(2) Sandy was a willing co-conspirator because 1)it would be a shame to have to come back if I sell the book and 2)it looked like a pretty fabulous museum.

And let me tell you, it IS a pretty fabulous museum.

The museum explores the story of Norwegian immigration to the United States, putting it in the context of nineteenth century Norwegian culture and the broader experience of nineteenth century immigration to America. It also celebrates Norwegian folk art, then and now. In fact, if you’re in Decorah for a longer period, you can sign up for classes in rosemaling, traditional embroidery techniques (3), folk music, flatbread baking (4), etc, etc, etc. 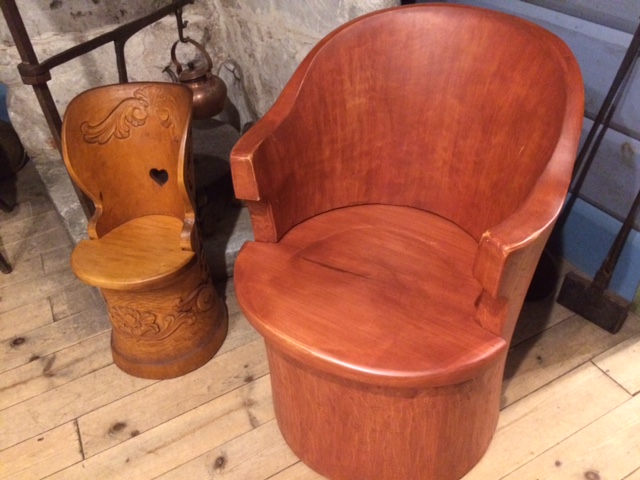 The folk art exhibits are breathtakingly beautiful. Well-trained docents give tours of a campus of well-maintained historic buildings, ranging in size and complexity from a small log storage cabin (5) to a nineteenth century Lutheran church. And the exhibit on Norwegian immigration not only told me a portion of the story of immigrants to the United States that I had not heard before, but it made elements of the broader story of nineteenth century immigration to this country more vivid for me.

Here are some of the things that caught my imagination:

I came away stunned by new awareness of just how hard it was for emigrants to leave their homes to travel to a new country.  I was also stunned by the love of decoration pervasive in traditional Norwegian culture.

If you’re anywhere near Decorah, take the time for a visit.

(1)Part 3, or maybe Part 4, depending on whether you count our consolation prize four-day weekend in 2014.  And you really should, because it was weird and wonderful.

(5)The answer to the question of where people stored things in a one-room cabin.

(6) Norwegian Quakers, you ask? I did, too. According to our docent, Denmark/Norway fought on the French side in the Napoleonic Wars. (Brief pause while I check this.) Some Norwegian prisoners of war were taken to England, where Quakers and Methodists visited them in prison and managed to convert a number of them from the state-sponsored Lutheran church.

(7) In the case of Norway, the limits were imposed by the country’s geography. In the case of Ireland, they were artificially created by British policies.

The Magpie Cafe and Coffeehouse is a wonderful lunch spot. Good coffee and imaginative sandwiches. I can’t speak for the quality of the pastries. But I’ve regretted not getting the cardamom cinnamon roll. It looked fabulous.