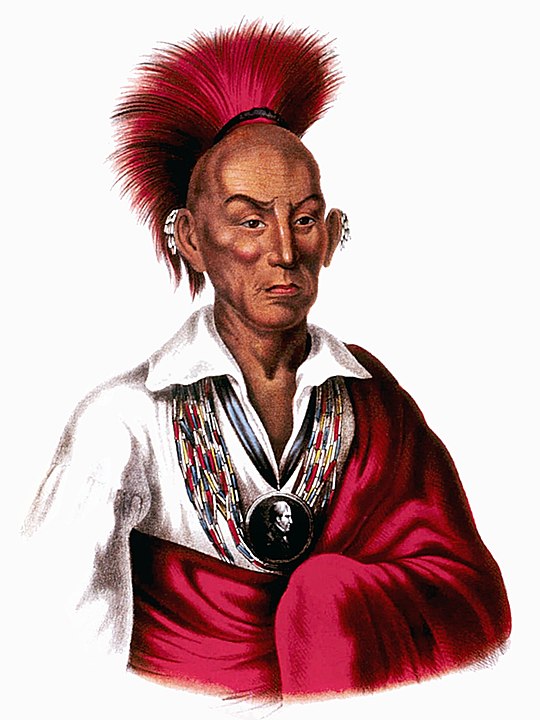 Black Hawk never accepted the treaty, claiming that the chief who signed for the Sauk did not have the authority to sell the land. He and his people traveled back to their settlement at Saukenuk, near modern Rock Island, Illinois, modern each summer to grow corn and other crops. When they returned in 1828, they found that the government had sold off parcels of the Sauk territory to individual citizens. In fact, settlers were living in Black Hawk’s own long house.

In 1832, Black Hawk determined to return his people to their home, encouraged by promises of help from the British, with whom he had sided in the war of 1812, and by visions of success from an influential medicine man named Wabokieshiek, known as the Winnebago Prophet. (You can see how this is going to work out, right?)

Relationships between the Sauk and settlers had been tense for several years. When Black Hawk crossed the Mississippi into Wisconsin from Iowa with a group of 1500 Sauk, roughly 1000 of them women , children and the elderly, skittish settlers sent word to General Edmund P Gaines. Commander of the Western Army, and Illinois Governor John Reynolds that Black Hawk had invaded.

Not surprisingly, the promised support never arrived. In May, Black Hawk attempted to negotiate with a small group of Illinois militiamen under the command of Major Isaiah Stillman who were camped nearby. He sent three of his men with a white flag to the militia camp. The militiamen, who could not understand their language assumed the worst and fired on them, killing one of the truce bearers. When the Sauk retaliated, Stillman’s volunteers panicked and fled in the face of what they perceived to be a large body of warriors. The losses at what came to be known as the Battle of Stillman’s Run were few, but they were enough to end any hope of peace.

Throughout June and early July, small bands of militia and Native Americans fought their way across northern Illinois and southern Wisconsin. (Not all of the Native Americans were part of Black Hawk’s band. Some other groups appear to have taken advantage of the situation to attack settlers, secure that Black Hawk’s people would take the blame.) Although the main Sauk band successfully eluded the pursuing militia, they had no time to rest or resupply.

On August 1, Black Hawk’s remaining forces of perhaps 500 men, women, and children had reached the banks of the Mississippi near the town of Bad Ax.(5) Notified by members of the Winnebago tribe that the Sauk were at the river’s edge, the settlement at Prairie du Chien sent a steamboat upriver, carrying a detachment of US Infantry and a six-pound cannon, with orders to keep the Sauk from crossing the river. Black Hawk attempted to surrender to the steamboat captain, who fired on the unprepared Sauk

Black Hawk surrendered on August 27. He was held for a time at Fort Crawford, then sent east as the main attraction of a multi-city tour designed to impress his peers with the folly of standing up against the United States government. The United States used his rebellion as an excuse for demanded further concessions from the Sauk and Fox chiefs, most of whom had not participated in Black Hawk’s doomed attempt to regain his homeland.