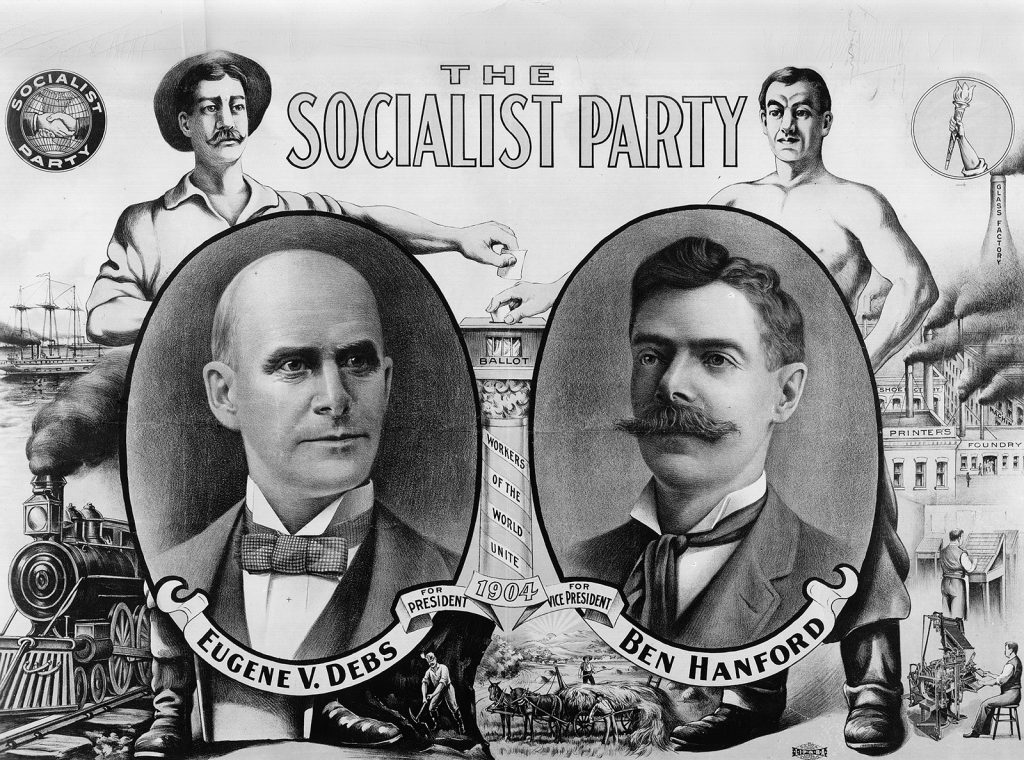 Labor organizer Eugene V. Debs was born in Terre Haute, Indiana, in 1855. He left home when he was fourteen to work for the railroad—not unusual for the time. In 1875, he helped organize a local lodge of the Brotherhood of Locomotive Fireman, a fraternal benefit society which gradually took on the role of a trade union. He rose rapidly in the organization, becoming its national secretary and treasurer in 1880.

In 1893, Debs took labor organization one step further, when he successfully united railway workers from different crafts into the first industrial union in the United States, the American Railway Union. As the union’s first president, he successfully led its members in a strike for higher wages from the Great Northern Railway in April 1894. The national press gave him the nickname “King” Debs.

In June, “King” Debs and the union were in the news again in the great Pullman Strike. As a result of financial reverses in the panic of 1893, the Pullman Palace Car Company cut its wages by 25 percent, but did not cut rents for company-owned workers’ housing in Pullman, Illinois, the company town near (now in) Chicago. Many workers and their families faced starvation. Local members of the union sent a delegation to Pullman’s president, George M. Pullman, to present their grievances about low wages, poor working conditions and sixteen-hour work days. Pullman refused to meet with them.

The Pullman workers voted to strike and walked off the job on May 11, 1894. At its June meeting, the American Railway Union’s national council called for a nationwide boycott of trains carrying Pullman cars until the company submitted the dispute to arbitration by June 26. The company was unwilling to play.

Within four days, union locals in twenty-seven states went out on sympathy strikes, affecting twenty-nine railroads. Illinois governor John P. Altgeld sympathized with the strikers and initially refused call out the militia, so the railroads’ management called on the deferral government for help. On July 2, U.S. Attorney General Richard Olney got an injunction against the strike from local judges on the grounds that the union was impeding mail service and interstate commerce. (1) Union leaders ignored the injunction. On July 4, President Grover Cleveland ordered 2,500 federal troops to Chicago. The strike ended within a week and troops were recalled on July 20.(2)

The Pullman Strike was a critical event in American labor history. It was also a turning point for Debs. He was arrested at the height of the violence and ultimately sentenced to six months in jail for contempt of court and conspiring to interfere with the U.S. mail. During his prison terms at Woodstock, Illinois, Debs read broadly. Introduced for the first time to the works of Karl Marx,(4) he came to see the labor movement as a struggle between classes.

After announcing his conversion to socialism in 1897, Debs helped found the Social Democratic party, which was renamed the Socialist Party in 1901. Debs ran as the Socialist Party candidate for President five times between 1900 and 1920.His highest populist vote came in 1920, when he received about 915,000 popular votes. (But no votes in the electoral college.) (5) He was in prison at the time, serving a sentence for criticizing the federal government’s use of the 1917 Sabotage and Espionage Act against labor activists.

He was released from prison in 1921 by presidential order. His citizenship, which he lost in 1918 when he was convicted of sedition (for labor activism) , was posthumously restored in 1976.

(1) Unfortunately for the strikers, they derailed a locomotive attached to a U.S. mail train. And as you know, neither snow, nor sleet nor striking railway workers can stop the U.S. Postal service from its appointed rounds.
(2) A lot happened in between the arrival of the troops and the end of the strike. Altgeld and Cleveland sent piss-y telegrams back and forth. Strikers rioted and destroyed lots of property. More federal troops arrived. State militia arrived. National guardsmen fired into the crowd, killing several strikers.(3) It was a busy week.
(3)When will people learn that is a bad idea? It never turns out well.
(4) Obviously a well-stocked prison library.
(5) Just to put this in context: the winner, Warren G. Harding, received 16,513,200 popular votes.