One of the pleasures of writing History in the Margins is the opportunity to have conversations with readers “off the page.” Jack French is a long-time reader who often has an interesting point to make or a story to share. (Some of you may remember the guest post he wrote several months ago about the woman who invented Monopoly. )

He recently wrote to me about a book he thought I (and you) might enjoy. And he kindly gave me permission to share his review with you directly.

Take it away, Jack! 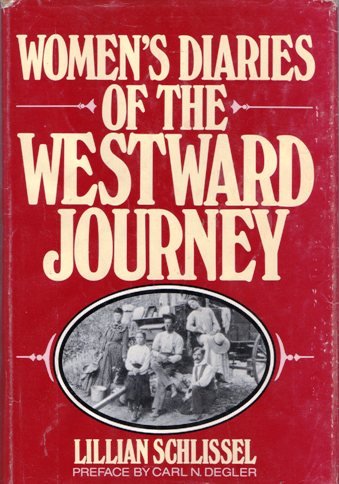 As you know I lecture to senior villages on a host of topics, one of which is “The Wild West” which includes a discussion of the struggles and courage shown by the immigrants who traveled in covered wagons over 2,000 miles from the Mississippi River to the West Coast in the mid 1800’s.

Recently I came across a great book I’d like to recommend to you and your readers. It is Women’s Diaries of the Westward Journey by Lillian Schlissel. It’s gone through 4 editions, starting in 1982, all in paperback, and most are available from any internet used-book merchant for under five bucks.

This fascinating book contains the first person narratives of several women who made that perilous, lengthy journey to either Oregon or California. The average trip started in April and if lucky, ended in September. Indian attacks were only the third, and least of their dangers…..communicable diseases took the greatest toll, while accidents, falls, drownings were second.

Anyone who wants to read of the grit, resilience, and bravery of their maternal ancestors, told in their own words, should get a copy of this book.

Jack French is a former Navy officer and retired FBI Agent in Virginia. He is a vintage radio historian and the author of two published books on the subject. Jack is a guest lecturer whose topics include: Civil War Heroines, History of Toys & Games, and the Golden Age of Radio.  www.jackfrenchlectures.com