I must admit, I did not expect to write another blog post about Civil War medicine any time soon. That’s not where my head is these days. But the recent mobilization of Navy hospital ships to help the embattled medical systems in New York and Los Angeles led an old friend and regular reader to ask me about hospital ships in the American Civil War.

This one’s for you, Tracy.

In the spring of 1862, General George McClellan was preparing to lead the Army of the Potomac in an amphibious advance on the Confederate capital through the Virginia Peninsula. It was clear to the Army’s Medical Bureau that this strategy would offer new challenges to a medical system that had been seriously overburdened from the first days of the war.* In addition to high battle casualties, field hospitals could expect large numbers of soldiers who succumbed to disease thanks to the peninsula’s malarial swamps. Moreover, the region’s terrain, with its swampy forests and miry roads, would make it difficult to transport wounded and sick men from the battlefield with horse-drawn wagons.

The Commission’s secretary, landscape architect Frederick Law Olmsted, was the organizing force behind the project. Volunteer nurses were the engine that made it run. Olmsted envisioned the transport ships as being less like hospitals and more like a home away from home, where an injured soldier could rest and recover in relative ease, complete with women to prepare beds for incoming casualties, staff kitchens to prepare special diets for the ill and comfort the wounded—replicating in an institutional setting the middle-class domestic experience of nursing a family member at home.

“Imagine a great river or sound steamer filled on every deck—every berth and every square inch of room covered with wounded men; even the stairs and gangways and guards filled with those who are less badly wounded; and then imagine fifty well men, on every kind of errand, rushing to and fro over them, every touch bringing agony to the poor fellows, while stretcher after stretcher came along, hoping to find an empty place; and then imagine what it was to keep calm ourselves, and make sure that every man on both boats was properly refreshed and fed.” 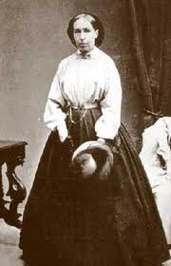 Olmsted also envisioned the ships as a secure place for middle-class and elite women to volunteer away from the rough atmosphere of overcrowded military hospitals. That didn’t work out either. In reality, the nurses on the transport ships were closer to the battlefield than their counterparts in the military hospitals and saw some of the worst scenes of suffering of the war. The nurses often worked for two or three days with little sleep and ate meals snatched when the demands of duty allowed. They hauled buckets of water for cooking, cleaning, and laundry, cooked endless gallons of gruel and beef tea over spirit lamps, and commandeered supplies from military encampments whenever they got a chance. Not exactly the sheltered experience their families expected.

The Sanitary Commission hospital transport service plunged into action on May 4. (Like everything else that happened in the early days of the Civil War, they weren’t quite ready.) In the following weeks, the hospital ships transported thousands of sick and wounded men from the Virginia Peninsula to military hospitals in New York, Philadelphia, Washing, Annapolis, and Baltimore. In mid- July, Confederate gunboats began firing on the Sanitary Commission’s ships, removing the last illusion that the transport ships were safe. Olmsted refused to accept new female volunteers and began to demobilize his forces. By the end of the month, the commission had turned all responsibility for transporting casualties back to the Union army.

Hospital transport ships appeared in another guise on the Mississippi River, where a side-wheel steamer named the Red Rover was used as a hospital ship on an on-again, off-again basis.

* Thanks to the combination of an elderly and inflexible Surgeon General who took pride in paring his budget to the bone and a sudden massive increase in the size of the army.

**A civilian organization that offered its services to the Union as a medical watchdog group, with a mandate to inspect military camps and hospitals and the power to enforce sanitary regulations for the benefit of the soldiers. Lincoln reluctantly signed the order establishing the Commission on June 13, 1861—just in time to move into action when the first major battle of the war, the Battle of Bull Run ( or Manassas if you prefer), demonstrated that the United States Army’s Medical Bureau was totally unprepared for the sheer volume of the wounded and ill. (The Confederate Army’s medical system wasn’t in any better shape.)

Just for the record, the Commission basically highjacked Dr. Elizabeth Blackwell’s Women’s Central Association of Relief. A story that aggravates me so greatly that I may need to write one more Civil War medicine post just so I am not guilty of contributing to historical erasure. Don’t touch that dial.