Those of you who’ve been hanging out here in the Margins for a while know that I love books that turn what we think about a historical subject upside down, or at the very least expand it.

Historian Serena Zabin does both in The Boston Massacre: A Family History. 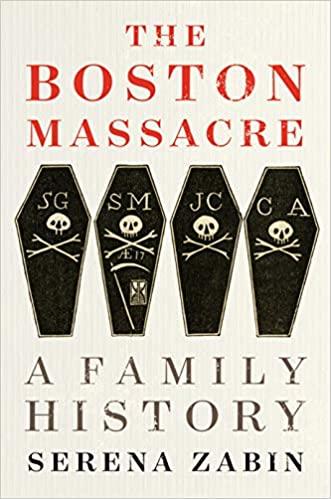 Paul Revere’s iconic engraving of the “Boston Massacre” of 1770 shows colonists and soldiers facing each other across a clear divide, breached only by gunfire. Zabin argues that prior to the violence of March 5, 1770, the two groups were in fact linked together in complicated social, spatial, and and even familial relationships. 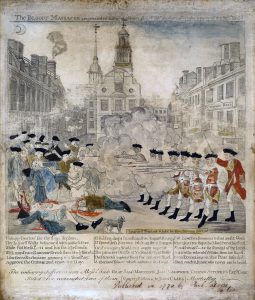 Zabin drills down into details of relationships between Bostonians and the unwelcome soldiers quartered in their midst in the years prior to the Boston Massacre. Many were housed in tents on Boston Commons, but others, especially men with families, rented rooms in Boston homes. All of them patronized Boston businesses. Beyond these casual points of connection, Zabin considers the effects of marriages, seductions and affairs. She looks at instances of members of one group serving as godparents for children of the other group, at roles played by soldiers’ wives, at soldiers working side jobs for Bostonians, and at pub brawls. She outlines the social relationships between British officers and the Bostonian elite.

Having established the depth and intricacy of these relationships, Zabin looks in detail at the events of March 5, 1770, the mass of contradictory accounts of those events, and the trials that followed. She demonstrates how attorneys on both sides erased those relationships from their arguments, creating their own versions of the gulf between Bostonians and British soldiers that appears in Revere’s engraving.

The Boston Massacre is a well-written and eye-opening addition to the social history of colonial America.

Most of this review appeared previously Shelf Awareness for Readers