If you’re a person with a taste for history and you live in Chicago, there are some stories that you can’t avoid.* The Columbian Exposition. The rise of the skyscraper.  The Hay Market Square riot.** The Chicago Fire. But the thing about stories that you “know” through osmosis is that you often don’t really know them at all. (Or maybe that’s just me.)

Urban historian Carl Smith’s book on the Chicago Fire made that blinding clear to me. 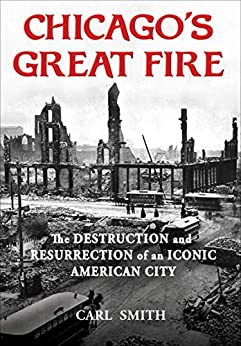 In October, 1871, a devastating fire swept through Chicago, destroying much of the forty-year-old city in a few days and leaving 90,000 people homeless. In Chicago’s Great Fire, The Destruction and Resurrection of an Iconic American City,  Smith tells the story of both the fire and Chicago’s astonishing recovery.

Smith’s description of the fire’s path across the city is gripping. Despite the fact that the reader already knows how the story ends, he creates narrative tension through a series of vignettes based on the memories of those who fled the fire—including the long-maligned Mrs. O’Leary.***

His discussion of why Chicago was vulnerable to fire and how it rebounded so quickly are equally fascinating. He describes the rapid growth of Chicago and a city government unwilling to listen to warnings about the potential danger of fire. He explores the city’s divisive class, religious, and ethnic differences—which at their simplest broke down into wealthy and middle-class native-born Protestants of British descendent versus everyone else, with a special disdain for Irish Catholics—and the struggles for political control resulting from those differences. He examines the outpouring of international support after the fire, thanks in large part to rapid news reports made possible by the railroads and the telegraph. He considers innovations that shaped the response to the fire, including the creation of professional fire departments and the expansion of the popular press. He ends with the role the fire has played in Chicago’s self-image over the 150 years since the city burned.

Chicago’s Great Fire is a colorful and careful account of the growth and regrowth of an American city seen through the lens of the disaster that helped define it.

* And why should you? They are fascinating stories.

***Spoiler alert: Smith demonstrates convincingly that neither O’Leary nor her cow were responsible for the disaster.

Most of this review previously appeared in Shelf Awareness for Readers