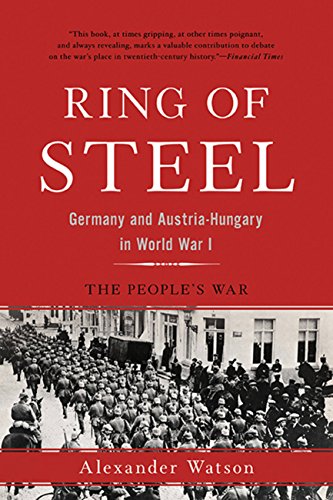 I must admit, Alexander Watson’s Ring of Steel has been sitting on my To-Be-Read shelves since 2014. I received it from a publisher who hoped I would review it. I was in over my head on a writing project that had nothing do with World War I. Read a 500+ page book with no immediate application to the task at hand? Nope!

I dipped into Ring of Steel because I wanted to know what life was like in Berlin during World War I. The short answer? Not good. Watson takes a deep dive into food shortages, the black market, and largely unsuccessful government attempts to manage them in both Germany and the Austro-Hungarian empire. He looks at how people tried to supplement their food, from urban gardening, food cooperatives, and “hamstering” —the name for city people traveling into the countryside to forage. He looks at the impact of conscripting men and animals on the ability of farms to produce crops. He also makes clear how dependent Germany was on imported food and, more importantly, on imported fertilizer. (Reading this in the days leading up to Thanksgiving has certainly made me it easier to count my blessings.)

Watson answered the questions I knew I had, and many that I hadn’t known to ask. For instance, Britain implemented a long-range, ever-tightening blockade of Germany that was illegal according to international law of the time.** Something I certainly didn’t know.

I found it particularly interesting to look at familiar events, such as the U-boat campaign and the infamous Zimmermann telegram, from the German perspective. It is worth remembering that there is always another side to the war.***

Ring of Steel is an excellent example of military history that moves beyond the battlefield and armaments to look at the the society, culture, and ideas that surrounded them. If that’s your stein of beer, I highly recommend it.

*With a hat tip to Elizabeth Lunday, who recommended it in the notes to an episode of her The Year That Was podcast.  It is one of the best and most unusual history podcasts around: an extraordinary look at 1919 from many angles. I just finished re-listening to the episode on the Spanish Flu, which she recorded in October 2019. It came a bit too close to home.

** A technique the Germans borrowed with great success in World War II?

***In the case of the Zingermann telegram, there is a third side to the story that is often overlooked: Mexico’s response.