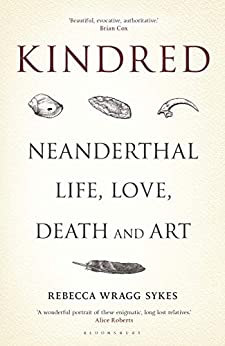 These days, Neanderthals are hot, and not just in academic circles. Big discoveries about Neanderthals make the news in mainstream media and major science journals alike. In Kindred: Neanderthal Life, Love, Death, and Art, archaeologist Rebecca Wragg Sykes demonstrates that more is happening in the world of Neanderthal studies than what she terms “Neander-news”.

Sykes shares her considerable knowledge about current Neanderthal studies in a style that is clear enough for the lay reader but never simplistic.* She looks closely at long-held beliefs about Neanderthals and how they evolved, beginning with the assumption that they lived primarily in the Ice Age. She shows how archaeologists are overturning many of those beliefs as a result of new discoveries and the application of new scientific technologies to sites that were first excavated decades earlier. She considers the ways in which Neanderthals are different from us physically, and speculates as to why. She introduces readers to the details of Neanderthals’ tools, diet, and shelters, pulling the curtain back to demonstrate how scientists know what they know. And she makes some fascinating, and controversial, leaps from what we know about the physical world of the Neanderthals to what that knowledge might tell us about how they thought about that world. Personally, I love this stuff.

At each step of the way, Sykes compares our new knowledge about Neanderthals with our knowledge about ancient homo sapiens. She makes a persuasive case that Neanderthals were not a dead end on the path to us, but instead “enormously adaptable and even successful ancient relatives.” In short, they were our kindred.

In the end, Kindred is a book not only about who the Neanderthals were and how they lived, but about what it means to be human.

*My favorite sentence in the book: “Neanderthals have long held the title of Most Hench Hominim”**

**I will save you the trouble of looking it up: Hench (Comparative, more hench. Superlative, most hench) Big, strong, and muscular.