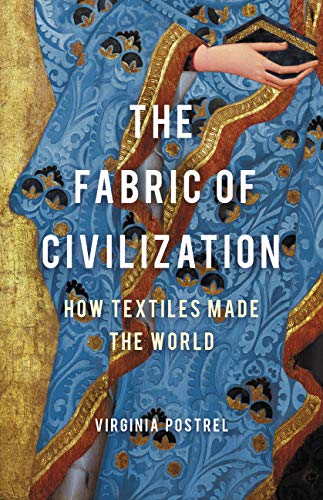 Two sentences early in Virginia Postrel’s The Fabric of Civilization: How Textiles Made the World caught my imagination:

“What we usually call the Stone Age could just as easily be called the String Age. The two prehistoric technologies were literally intertwined.”

I was predisposed to enjoy the book, which combines two of my favorite things—history and textiles—in a big picture exploration of commerce, technology, and civilization itself. But with those two sentences I was hooked. And I remained hooked for the entire book. If I had been reading in a hard copy instead of an e-galley, I would have put lots of exclamation marks in the margins and stuffed it full of sticky notes.

The Fabric of Civilization is a story of innovation, or more accurately a series of stories. Postrel convincingly argues that textiles have played a central role in the histories of technology, commerce, and civilization itself. She describes innovations in the creation of textiles, from the game-changing discovery of string in the Stone Age to current efforts to engineer “smart textiles.”* She explains the fundamental principles of spinning and weaving, and the unexpected relationship between weaving and binary code.** She considers how changes in textile manufacturing shaped the larger world, including the textile mills that sparked the Industrial Revolution and the search for better dyes that created the modern chemical industry. She looks at the development of information technologies as a result of long-distance textile trades: business letters in ancient Assyria, regular mail service in medieval Italy, double-entry bookkeeping in Renaissance Italy and the roots of modern banking in the need for international credit arrangements in the early modern era.

Postrel is writing history on a global scale, but she never loses sight of the people in her story. A woman weaver in ancient Assyria, responding to changing market demands, the teenaged Niccolo Machiavelli*** mastering the “new math” of Hindu-Arabic numerals, paleoanthropologists attempting to reproduce prehistoric fibers, and modern textile chemists and engineers all play a role.

Combining exhaustive research with an accessible writing style, The Fabric of Civilization will appeal to both fans of micro-histories and to textile junkies interested in the history of their passion.

*I doubt that I’ll be an early adopter.

**She describes weavers as “visually trained people with strong number skills.” This was reinforced in my research for a piece on Afghan war rugs for MHQ: The Quarterly Journal of Military History. When one scholar asked an Afghan weaver how she translated images into rug patterns she said: “I don’t see it as a picture. I see it as numbers and I make it a song.” But I digress.

***I assume that most of you recognize the name Machiavelli, or at least the term machiavellian. A minor fifteenth century Italian diplomat, he is best known as the author of The Prince, a work of political philosophy that argues princes must see things as they are and take action accordingly, rather than act based on ideal principles.