Newspaper owners, particularly those who maintained reporters overseas, were engaged in a constant balancing act between running a business and offering a public service. I offer you the example of the Chicago Tribune’s Army Edition, which was both. 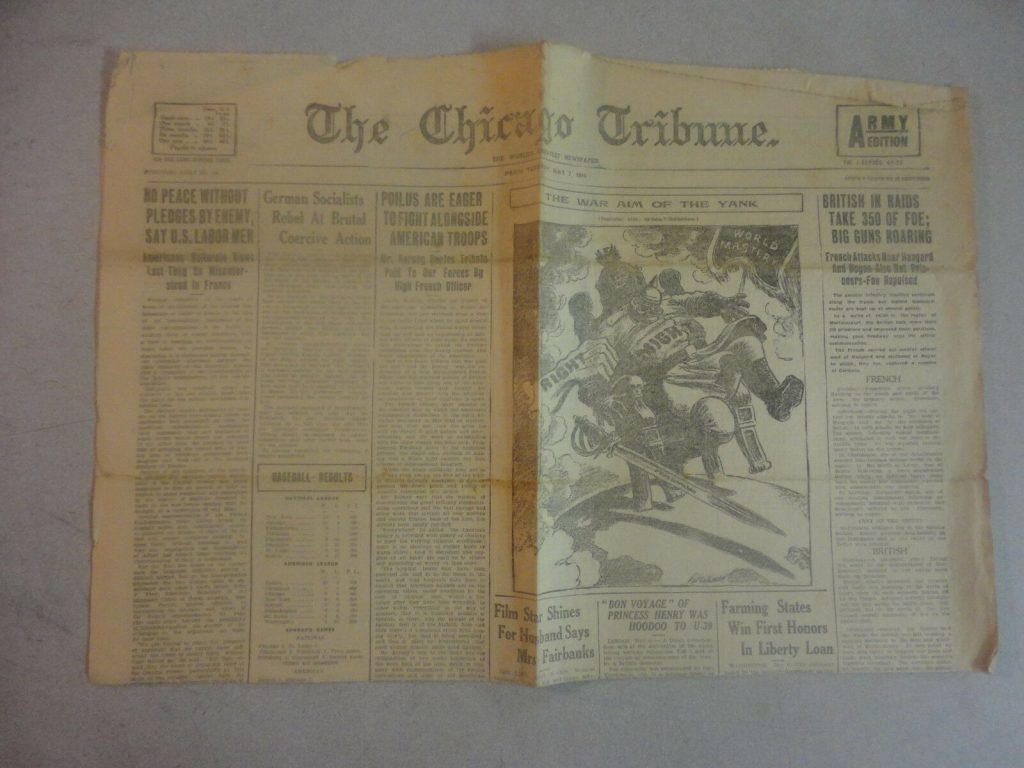 Note the baseball box scores right above the fold. McCormick and his editor knew their audience.

The Army Edition was a four-page paper aimed at American soldiers in France during World War I, launched in Paris in July, 1917. * The Tribune’s publisher, Robert McCormick, intended to provide soldiers with a blend of war and home town news, as well as popular features from the parent paper, including political cartoons by John T. McCutchen and a column from the Tribune’s editorial page titled “A Line O’Type or Two.”** Self-described “girl-reporter” Peggy Hull  contributed chatty pieces under the heading “How Peggy Got to Paris” about her experiences as an unofficial and unaccredited guest of General Pershing and the American Expeditionary Force at an unnamed but easily identifiable American training camp . In August, Tribune sports writer and humor columnist Ring Lardner arrived for a two month stint with the assignment of reporting on “the funny side of the war.”*** (Hull and Lardner’s pieces also ran in the Tribune’s papers back home.  McCormick believed in getting full value for his extravagant gestures.)

McCormick saw the paper as a service to soldiers, but he also wanted it to pay for itself. He sold the paper for two cents, the same price as the much larger Chicago Tribune. He also actively courted ads from retailers who wanted to sell mail order goods to soldiers. (He also pitched this as a service to soldiers who had arrived in France and found it difficult to buy winter clothing, boots, and other necessities.)

After the war, McCormick used the structure he had put in place with the Army Edition to create the famed Paris Edition, which became a home away from home for Lost Generation luminaries like Ernest Hemingway (who wrote for the paper) and F.Scott Fitzgerald (who just liked to hang out there). It was also the training ground for a generation of foreign correspondents.

*The official army newspaper, Stars and Stripes, was originally founded during the American Civil War by Union soldiers, who used a captured newspaper press to print four issues. The paper was revived by the Army in World War I and produced by an all-military staff. Its first issue was published on February 8, 1918, almost six months after the debut of the Tribune’s Army Edition. The paper was created because soldiers complained that they weren’t getting reliable news from home. Not an endorsement for the Army Edition as a source of news rather than a source of entertainment.

**A truly dreadful pun on the linotype machine  , a type-setting machine that was hot technology at the time. First introduced in 1866, it powered the production of daily newspapers around the world through the 1970s.

In my opinion, the column was as dreadful as the punny title: a collection of whimsical essays, light verse, “humorous” clippings from rural newspapers, and pieces that poked fun at the “so-called human race”. A lot of people must have disagreed with me. The column ran for thirty years under three separate editors.

***Ring Lardner is not particularly well known today. (In fact, I got him mixed up in my head with Damon Runyon, whose work I love. I was mighty disappointed when I realized my error.) But he was quite famous at the time. So famous that a would-be writer named Ernest Hemingway sometimes signed his sports articles for the Oak Park and River High School newspaper as “Ring Lardner, Jr.”

At the risk of thoroughly establishing a reputation as a grouch, I will admit that I don’t think Ring Lardner is funny. You don’t have to take my word for it. Here’s an example in which he combines baseball and international relations: https://ourgame.mlblogs.com/in-the-wake-of-the-news-france-e61713260255