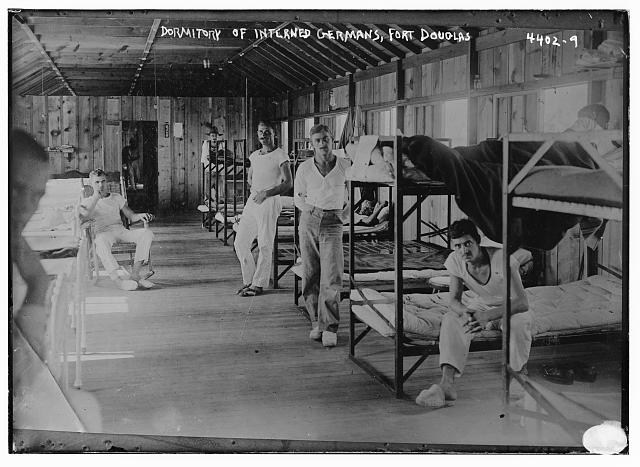 Until recently, I thought of internment camps only in terms of the shameful removal and imprisonment of Japanese Americans by the United States government, which saw concentrated populations of people of Japanese descent as a security risk, based on no evidence what so ever.* Several years ago, thanks to the excellent BBC mystery series Foyle’s War,  my vision of World War II internment camps expanded to include the British internment of German nationals as “enemy aliens “ for much the same reasons. But I still thought of internment camps for civilians as something that happened in World War II.

To my surprise, it turns out that the internment of enemy aliens was a thing in World War I as well.** Together, combatant nations on both sides of the war, including the United States, interned more than 400,000 civilians of enemy nationality over the course of the war. Unlike the Japanese interment in World War II, most of the interned civilians were men.***

The United States was a relatively small player in the internment game, but it was definitely a player.

America’s entry into the war was accompanied by an outbreak of nativism and xenophobia directed at German immigrants and Americans of German dissent. (I suspect it had been simmering under the surface for a long time. Germans were the largest non-English speaking population and the most successful immigrant population at the time.) German books were removed from public library shelves. German classes were abruptly dropped from public schools.**** Citizens of German descent were subjected to vigilante action and in at least once case a German immigrant was lynched by a drunken mob.

Soon after the United States entered the war, Woodrow Wilson used the 1798 Alien Enemy Act to impose a series of restriction on German nationals. They were banned from entering “forbidden zones”, required to register with the police or the local postmaster, and forbidden to own radios or firearms. The restrictions were soon extended to included citizens of the Austro-Hungarian empire and all female enemy aliens. German residents were kept under surveillance for violations of these restrictions, by their neighbors as well as by the authorities, and police round-ups were common. Over the course of the war, more than 10,000 German residents were arrested. Most were released after a brief investigation, but about 2,300 German and Austrian nationals were held in internment camps, including twenty-nine musicians from the Boston symphony orchestra. About ten percent were wealthy German born immigrants suspected of financing pro-German propaganda. Fifteen were women suspected of “aiding the enemy”—a phrase that I assume means spying in this context. Most were working class men who had been involved in radical politics or labor unrest.

A majority of the internees were released in June 1919, but some remained in custody as late as April 1920. (Just a reminder: the war ended in November, 1918.)

The internment camps of World War I differed significantly from those of World War II, but both were based on the belief that national descent or ethnicity could define loyalty.  That belief–expanded to include religion–has been a common thread in our national defense policy ever since. *sigh*

* In the course of digging around on the subject of enemy internment I learned that two Japanese internment camps were located in southeastern Arkansas—which definitely didn’t fit into my understanding of this ugly piece of American history. Arkansas State University has created a museum and memorial on the site of one of the camps. (Check it out here:  https://rohwer.astate.edu/ )When things open up again, we’re heading out on more road trips through history. This is now on the list.

** Perhaps this is something everyone knows and I was reading a book about something else in the back of American history class the day we covered it. (Thanks to alphabetical order I often sat in a back corner of the room, which made it easy to hold an open book on my lap when things were dull. I’m not naming any names, but this was true all too often in my American history class even though I was predisposed to be interested. )

***This did not mean that women and children were unaffected. Left behind when their male relatives were interned, they suffered financially from the loss of a primary bread-winner and from the social stigma attached to being “dangerous” foreigners. Not to mention the emotional trauma of having a father, son or brother taken away. The assumption that war is experienced only by men is built on a narrow definition of war.

****It wasn’t restored in my hometown school system until my junior year of high school. Hatred has a long, invisible tail.