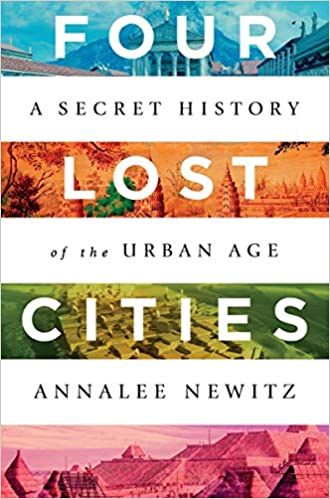 I love books in which the author sets out on a personal quest to understand a historical question and lets the reader tag along. Four Lost Cities: A Secret History of the Urban Age by science journalist and science fiction novelist Annalee Newitz is such a book. Even better from my perspective, their quest is rooted in archeology, a subject I’ve been fascinated by since I was about eight years old.*

Newitz leads the reader on a fascinating exploration of the rise and fall of four of the most spectacular examples of cities that were abandoned by their inhabitants: the Neolithic city of Çatalöyük in central Turkey, Roman Pompeii, Angkor Wat in Cambodia and the pre-Columbian city Cahokia in modern Illinois near the Mississippi river. In the process, they consider the questions of why cities fall, the powerful trope of the “lost city,” and what we can learn from the failure of these cities.

The exploration is literal: Newitz visits the ruins of each of the four cities and meets with archeologists involved in cutting edge work related to each city. Some of the most interesting sections of the book deal with archeologists using new technologies and asking new questions of familiar sources to look beyond the spectacular remains and the elite leaders who ordered their construction and study the lives of each city’s non-elite population. Before I read Four Lost Cities I thought I knew a fair about about three of the four sites. Apparently not.

Newitz makes a convincing argument that while the four cities were very different culturally they shared common failures resulting from prolonged periods of political instability coupled with environmental crisis—failures that speak to our present. But Four Lost Cities is not a dystopian warning for an age of global warming. Instead, Newitz offers an appealing combination of travel account, historical narrative, hard science, and hope.

*It occurs to me as I type this that I first discovered a lot of my personal passions when I was eight or nine. (Ballet was even earlier.) Apparently I earned my history nerd card early.