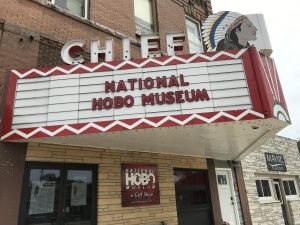 There are some roadside attractions that are impossible to resist. As far as My Own True Love and I were concerned, the National Hobo Museum was one of those attractions. We got off the highway knowing that it would either be dreadful or wonderful. In fact, it was both.

Located in Britt, Iowa, also home to a cemetery where many steam-era hobos were buried, the museum is the offshoot of the National Hobo Convention, which began in 1900 as an annual gathering of hobos and has evolved into a weekend-long celebration.* In the mid-1970s, three former hobos created a foundation dedicated to continuing the Hobo Convention and telling the stories of the hobo life.

The museum itself began with a gift of money and a box of artifacts from a anonymous former hobo. It is now the home for artifacts donated by former hobos and their families from around the world and a large archive of written documents and recorded interviews. (Just waiting for the right scholar to dive in.)

Many of those artifacts are fascinating, but they are not well-displayed. It would be hard for the casual visitor to get much out of them if it weren’t for a series of narrative plaques along the walls and an extraordinary documentary film that is the heart of the museum.** The film combines historical footage of hobos, interviews with a diverse group of former hobos,*** and excerpts of letters from still more former hobos in a gripping and occasionally heartbreaking exploration of the hobo life.

Here are my takeaways:

I was left with a question: the film showed clips of riots by the hunger and unemployed. This was a common feature of life in Weimar Germany but I have no sense of such riots here in America during the same period. I have some digging to do.

If you’re in the area, the museum is well worth the stop. Plan on more time than you think it will take: the film is not short. My only regret is that I didn’t buy the hoodie from the gift shop that had one of my favorite quotations across the front: “Not all those who wander are lost.”

*FYI It is scheduled for August 12-15 this year
**Unfortunately, I was too busy watching to write down the name of the film or the filmmaker. I didn’t worry about it because I was sure it would be noted on the website. It’s not.
***My favorite quotation is from a woman who hit the road at fifteen after an argument with her father about “language”: “I was getting cocky and I thought if I had to work like a man I ought to be able to work like a man.” She left with a friend (who she didn’t realize was pregnant) and headed toward Washington State to pick fruit.  When they got there, they discovered that it was illegal for women to work as fruit pickers in Washington at the time. After a horrible and often frightening year on the road, she went home. She married at sixteen, joined the Army in WWII, ran a small business after the war, and later became a missionary.