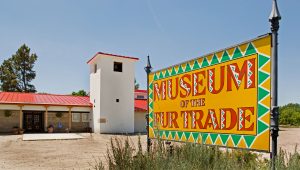 Our long road trips usually begin with an idea or a destination. * In the case of our recent trip through the Western plains, our route was shaped by two museums that have been on our road trip bucket list for a long time. One of those was the Museum of the Fur Trade, just outside Chadron, Nebraska. We were not disappointed.

My Own True Love and I both came to our interest in the history of the American fur trade through our fascination with the French voyageurs along the Mississippi and Missouri rivers, and the worldwide conflict between the British and French that ended with the defeat of France in 1763. The Museum of the Fur Trade places that story not only within its immediate context, but within a much larger story of fur-trading in North America. It starts early, with the fur trade’s connection with European cod-fishing off the Great Banks of Canada in the early seventeenth century. (I am continually fascinated by the way one trading commodity leads to another.) The museum describes how fur traders organized themselves in temporary partnerships each year and how the voyageurs created a complex system of written contracts to protect themselves from the big fur companies like the Hudson Bay Company and the American Fur Company. (The exhibit makes the off-hand comment that the voyageurs were the first unionized labor force in North America. An interesting idea, but I’m not sure it’s entirely accurate.)

The museum follows the fur trade west beyond the Great Lakes and the great rivers, and through the shift from beaver to buffalo and seal. I already knew something about fur trappers in the Rocky Mountains and Russian fur trappers in Alaska and along the Pacific coast, though I learned more. But I had no idea that furs were a significant component of North American and Russian trade with China, for instance.

The biggest “wow I didn’t know that” moment for me was the comancheros, an ethnically mixed group of traders who developed a distinctive form of trade in what is now New Mexico with the Comanches, Kiowas and other nations of the Southern Plains in the eighteenth and nineteenth centuries. Unlike what I think of as the British and French model, in which traders set up posts and trappers brought furs to them, the comancheros loaded up their burros and oxcarts with trading goods and travelled into the plains in search of their highly mobile customers. I suspect there is a lot more to this story that I don’t know: I was once again reminded that the history of the American southwest in particular, and Spanish rule in the Americas in general, is one of my historical blind spots.

The museum’s exhibits are relatively old fashioned—lots of stuff, not many interactive exhibits. But the stuff is used effectively, particularly the extensive section on trade textiles and the ways they were used by the Native Americans who acquired them. Exhibits on the fur trade often leave out the Native American side of the exchange; the Museum of the Fur Trade includes it as integral part of the story. And rightly so.**

The museum also has a small number of outdoor exhibits, most notably a meticulous reconstruction of the James Bordeaux trading post, which is one of the rare reconstructions to be included in the National Register of Historic Places.*** The museum is located on the site of the trading post, which was founded by James Bordeaux in 1836 and operated longer than any other trading post in the area. In 1872, the Bordeaux family sold the post to Francis (Bushy) Boucher, who was the son-in-law of Spotted Tail, the head chief of the Brule Lakota. Boucher expanded the trading post business to include an illegal operation selling arms and ammunition to Native Americans who were resisting the United States’ efforts to force them onto reservations. **** In August, 1876, army troopers confiscated 40,000 rounds of Winchester ammunition from Boucher and closed the post. It was in ruins by the time the first homesteaders reached the area along with the railroad in 1885.

In short, the museum is well worth a visit if you’re planning a trip through the western plains.

**In a recent issue of my newsletter , I talked about the stories we tell and the point of view from which we tell them and shared some questions that a reader/listener/viewer can ask if they  want to identify the holes in a particular version of a story. (Because there are always holes, no matter how well-intentioned the historian/curator/artist/novelist/reporter/human is.) One of those questions is “Who or what is missing from the story?”.

***I must admit that I did not enjoy the outdoor exhibits as much as I usually do. The sign warning visitors to watch out for rattlesnakes left me a little distracted. I hate snakes.

**** There are suggestions that Bordeaux also sold guns under the counter to the Lakota, though on a smaller scale, in the years after the Civil War when the buffalo robe trade was in decline. Like Boucher and other French-American fur traders over the centuries, Bordeaux had family ties with the Native American people with whom he traded. His wife was a Brule Lakota and his brother-in-law was Swift Bear, and influential chief and adherent of Spotted Tail. Sometimes the allegiances are more complicated than the historical marker would suggest.