As we drove across Wyoming, heading toward the western-most point of our trip, I noticed signs stating that we were on the Sand Creek Massacre Trail, which confused me slightly since I knew that the massacre occurred in Colorado.   A quick internet search informed me that the trail was a 600-mile stretch of road from the Wind River Reservation in central Wyoming to the site of the massacre.  The joint project of the Northern Arapaho people and the state 0f Wyoming commemorates the wandering of the Northern Arapaho and the Cheyenne in the years after the Massacre.

I first came across the story in 2019.  I think it’s worth sharing the post I wrote at the time again. (With a few tweaks.) 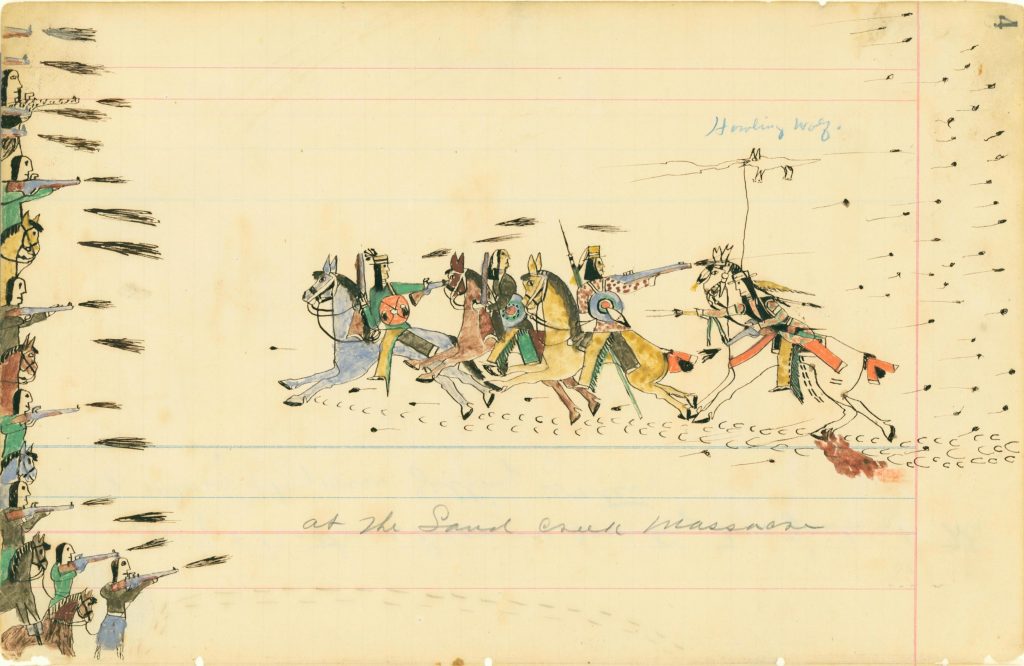 I assume most of you, at least in the United States, have heard of the Battle of Wounded Knee, the final battle of the Plains Wars of the late nineteenth century and the focus of Native American activism in the 1970s.(1) But have you heard of the Sand Creek Massacre?

I stumbled across the story while working on a article on the ledger art of Howling Wolf (2) for MHQ, The Quarterly Journal of Military History Quarterly.  I’ve been coming across references to the event ever since.

Here is the rough outline of what happened:

In November, 1864, a group of Cheyenne and Arapaho settled at Sand Creek, 170 miles southeast of Denver. The inhabitants had recently concluded peace negotiations with the governor of the territory and had every reason to believe they would be safe in their camp.  [It’s worth noting that this occurred during the American Civil War:  something I didn’t notice when I wrote this piece.]

At dawn on November 29, 675 members of the Colorado volunteer militia led by Colonel John Chivington attacked the village. Adult male warriors of the tribes, taken by surprise, attempted to defend the noncombatants, mostly women, children and the elderly, many of whom fled into the dry stream bed for which the village was named. The soldiers followed them, shooting. At a point several hundred yards above the village, the Cheyenne and Arapaho dug pits and trenches to protect themselves. The militia positioned howitzers on the opposite bank and bombarded their improvised defenses. Over the following eight hours, the militia killed roughly one third of inhabitants of the village (estimates as to the size of the village and the number dead vary), most of them noncombatants. The next day the militia returned, set fire to the village, killed the wounded, and mutilated the bodies.

The events were horrifying, but not uncommon in the larger context of the Plains Wars. What made them extraordinary was their aftermath. At first, Chivington was praised for the attack, which was framed as a pacification effort. But a different story began to emerge as soldiers who were opposed to the day’s actions filed reports that described the massacre in chilling detail. In response, Congress began an investigation of the events. A Congressional committee eventually ruled that Chivington had “deliberately planned and executed a foul and dastardly massacre” and “surprised and murdered in cold blood” Native Americans who “Had every reason to believe that they were under [government] protection.” The only reason Chivington wasn’t court-martialed is that he has already resigned his commission.

The deaths at Sand Creek were also the death of any hope of peace on the Plains. Many young warriors of the Plains nations saw the massacre as proof that treaties with the United States meant nothing. (A not unreasonable conclusion based on years of evidence.) Formerly divided nations united in opposition to the United State’s western expansion. Sand Creek was the first step on the path to Wounded Knee. (3)

Today Sand Creek is a historic site maintained by the National Park Service.

It is clear to me that there is a great deal I don’t know about this event, including how it fits into the larger stories of the Plains Wars and the American Civil War. I do know the place to start: Ari Kelman’s A Misplaced Massacre. One more book on the To-Be-Read list. One more topic I want to know more about..

(1) Though I must admit that is the sum total of what I knew about Wounded Knee when I wrote this post. I had somehow failed to read Bury My Heart at Wounded Knee at the time all my friends were reading it the ’70s.  I’ve made up for it since.

(2) Not to be confused with blues artist, Howling’ Wolf. Though both of them had good reason to howl.

(3) Am I the only one seeing parallels to the Amritsar massacre here?