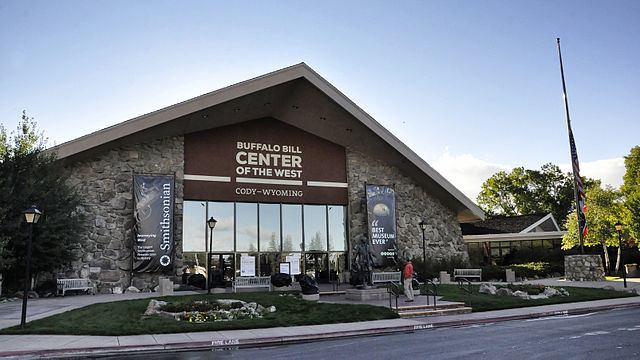 The Buffalo Bill Center of the West in Cody, Wyoming, was the ultimate goal of our two weeks on the road. And it was well worth the trip.

The museum is, in fact, a cluster of five museums dealing with different aspects of the American West—the Plains Indian Museum, the Buffalo Bill Museum, the Cody Firearms Museum, the Draper Natural History Museum, and the Whitney Western Art Museum—plus a special exhibit space. I went through three of the five museums and the special exhibition space, which featured a photo essay by Ivan McClellan titled Eight Seconds: Black Cowboys in America.

This is not the museum campus to visit if you are interested in homesteading or the role of the railroads in transforming the west. On its website, the museum bills itself as “Five Museums, One Wild West” and offers visitors a chance to explore Plains Indian cultures and “trailblazing cowboys and cowgirls.” On the surface, it’s a fair description. Looked at in broad terms, the museum focuses on “cowboys and Indians.” And yet, that is not the whole story. In each of those museums, the exhibits look at the subjects they present with depth and perspective and the curators question popular representations and iconic visions of the west, wild and otherwise. In fact, the exhibit on Black cowboys included a useful discussion of the difference between icons and stereotypes.*

The Plains Indian Museum looks at Plains Indian cultures in terms of both historical adversity and contemporary renewal, with an emphasis on “own voices”, traditional and contemporary. The result is a fascinating balancing act between big ideas and specific details. It explores questions of identity, and how the various nations are rebuilding their identities today using cultural centers, events, history and language.** It dives deep into the use of “material culture,” both through an extraordinary collection of traditional objects dating from the late 1700s to around 1890 and by looking at how modern Native artists have reinterpreted familiar objects. It shares important stories from traditional cultures and highlights the problem of missing and murdered indigenous women. One wall is devoted to a timeline of encounters between Native peoples and European-Americans—physically at the center of the gallery, but not the center of the exhibit.

Here are some of the things that particularly struck me:

I would have counted our visit to the Buffalo Bill Center of the West  as a win based on the Plains Indian Museum alone.

Next up: The Buffalo Bill Museum

* Ivan McClellan’s mission statement for the show is worth sharing:

“I come from a place where black folks work the land, tend to animals, rope, ride horses, and identify as cowboys., this is a narrative rarely told by media. People of color are mostly presented as victims, criminals, rapers or athletes….My aim is to expand the cowboy icon to include people of color. To saturate the world with this image so my kids will draw a cowboy with brown skin.”

**Language is always a big issue when a people are asserting their identity. Sometimes the first issue.