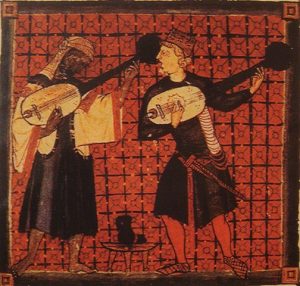 Several weeks ago My Own True Love and I had the pleasure of hearing a musician* play the oud and talk about its role in the multi-cultural mixing pot that was Islamic Spain. I sat and nodded my head in agreement as he talked about the spread of the oud through the Islamic world, and the transformation of oud first to lute then to guitar.** When he mentioned Ziryab, one of my favorite figures from the golden age of Islam, my head nodded even faster. This is the way blog posts are born.

Ziryab, nicknamed “the Blackbird” because of his sweet voice and dark complexion, was a trendsetter and fashion arbiter in the ninth century–the medieval Islamic equivalent of Beau Brummel.***

He was a freed slave who began his career as the talented student of a prominent Baghdad musician and composer, Ishaq al-Mawsili. Ziryab was so successful that many preferred the student to the teacher. Al-Mawsili appears to have been unaware of his student’s popularity until the caliph, Harun al-Rashid,**** asked if him if he had any particularly promising students. The teacher proudly introduced Ziryab, saying he might be a famous musician one day. The caliph was so taken with Ziryab’s music that al-Mawsili decided Baghdad wasn’t big enough for the two of them. He gave Ziryab two choices: leave town immediately (at al-Mawsili’s expense) or suffer his teacher’s enmity.

Ziryab chose the all-expenses paid tour of the Islamic world.

In 822 CE, he arrived at the Islamic court of Cordoba, the capital of Muslim Spain. He brought with him the latest styles from Baghdad, which was the political and cultural center of the civilized world.

The ruler of Cordoba, ‘Abd al-Rahman III, was determined to bring Muslim Spain into the ninth century. He welcomed Ziryab to his court, and gave him an official position as court musician, unofficial influence, a handsome salary, and furnished mansion.

In his role as court musician, Ziryab introduced the oud, turned it into the lute, founded a music conservatory and wrote songs that were performed in Andalusia for generations. He introduced new instruments and new forms of musical composition.

In his role as cultural ambassador from Baghdad, he changed the way Spain lived. He introduced the idea of wearing different fabrics in different seasons. He transformed personal hygiene, introducing soap, toothpaste, and better ways to clean clothes. (All already familiar in Baghdad.) He introduced new dishes, including asparagus, the idea of serving meals in courses, and the concept of the tablecloth. He is even given credit for bringing the game of chess to Spain.

Ziryab died in 857 CE, after 35 years of helping Cordoba (and ultimately Europe as a whole) clean up its act.

*His name is Ronnie Malley. If you’re in the Chicago area and interested in world music, he’s worth keeping an eye on. I’ll make it easy: http://www.ronniemalley.com
**In all fairness, not all musicologists agree that the guitar had its roots in Muslim Spain. I find their arguments unconvincing. But then, I would.
***For those of you who haven’t spent a lot of time, in Regency England, Beau Brummell was for a brief time the undisputed ruler of high society as a result of his impeccable taste in clothing, his biting wit, and his friendship with the Prince of Wales, the actual ruler.
****I first encountered Harun al-Raschid while reading the Arabian Nights as a nerdy child. In many of the stories, he disguised himself and wandered about his city at night, and then trapped his subjects with the information he learned while incognito. As a child I was indignant at the unfairness of his justice, even while acknowledging that it was, in fact, just. (Children understand abuse of power even when they don’t know the term.) Imagine my surprise when I learned that he was a real, much-admired, historical figure.