One of the first things My Own True Love and I did in Florence was visit Brunelleschi’s dome.* I suspect we are not alone in making that choice. 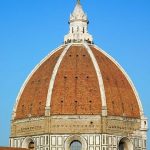 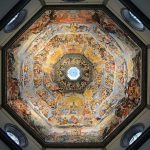 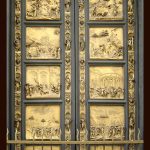 The first thing you need to know about visiting the Duomo is that it is part of a complex of impressive buildings, made up of the cathedral, of which the dome is a part, the baptistry,** a bell tower designed by Giotto, and a museum on the site of the original works of the cathedral (think construction office and artist workshops.) Depending on what you decide to do, you could spend the better part of two days on the complex—there’s a reason the ticket is good for two days. We decided to climb into the dome, tour the museum, and see the dome from inside the cathedral. Here are the highlights:

*Several weeks ago, I mentioned in passing that I planned to re-read Ross King’s book about the dome on our trip to Florence in anticipation of seeing the Duomo in real life. The book traveled with me to Florence, but I haven’t opened it. Instead I’ve been reading Sarah Gristwood’s newest book about sixteenth century European queens, coming soon to a blog post near you.
**One of the oldest buildings in Florence and predating the Duomo by hundreds of years/
***There are ways to skip the line, none of which worked for us. The steps are not avoidable. Think twice is you have heart trouble, claustrophobia or other ailments.
****Their phrase, not mine.