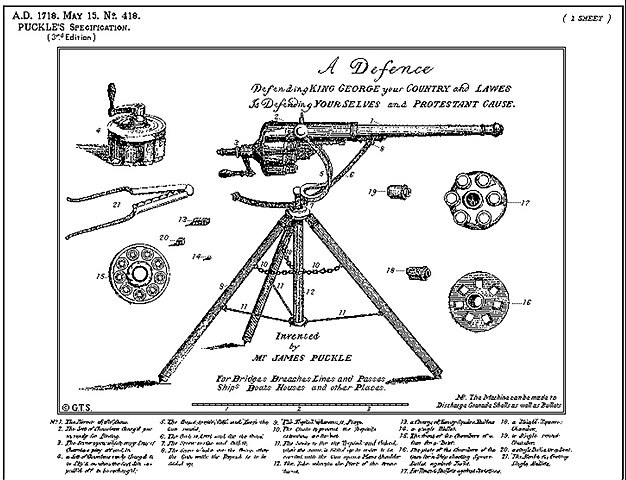 Recently My Own True Love and I were discussing machine guns over breakfast. (What, you’ve never discussed armaments over an omelet and an order of hash browns?)

In the course of settling the question of whether the Gatling gun or the Maxim gun was the first machine gun,* we discovered an ancestor of the machine gun that neither of us had heard of before. The Puckle gun, also known as the Defence Gun, was invented by British solicitor James Puckle in 1718. Down the rabbit hole I went.**

The Puckle Gun was designed to defend British ships against attack by Ottoman pirates, who attacked larger ships using small maneuverable boats. British ships were equipped with broad ship cannons designed for naval combat against ships of similar size. They could blow a Turkish ship out of the water, but only if they could hit it. They didn’t have the speed or flexibility needed to engage a moving target.

The Puckle Gun was repeating rifle, rather than a true machine gun. Mounted on a tripod, it was a single bore cannon with a flintlock firing mechanism and a revolving cylinder that could be loaded with round bullets, square bullets or powder and shot.*** Like the Gatling gun, the shooter operated the gun by hand-cranking the cylinder; unlike the Gatling gun, it fired one chamber at a time. Depending on its configuration, the cylinder could fire between six and eleven rounds before it had to be removed from the gun and reloaded. By eighteenth century standards, it was lightening fast. When it worked, the Puckle Gun could fire nine shots a minute, compared to the average musketeer’s rate of two to five shots per minute.

“When it worked” being an important point, apparently its flintlock mechanism was not only clumsy but unreliable. And while it could deliver roughly the same fire power as three men in the same time period, it required two to three men to handle. Not a net gain.

British officials did not jump to add the Puckle Gun to the armory. In addition to being unreliable, it was more difficult to make than a simple musket, requiring multiple complex parts and assembly that placed it well beyond the skills of most gunsmiths. (Personally, I don’t think the unintentionally humorous name Puckle Gun helped sell it as a serious armament.)

** Much to the confusion of Google, which thought sites about pickleball were a much better idea.

*** “Square bullets?” you ask. So did I. Puckett believed square bullet do more damage and designed this option specifically for use against Ottoman Turks. He reserved the more “merciful” round bullets for Christian enemies.