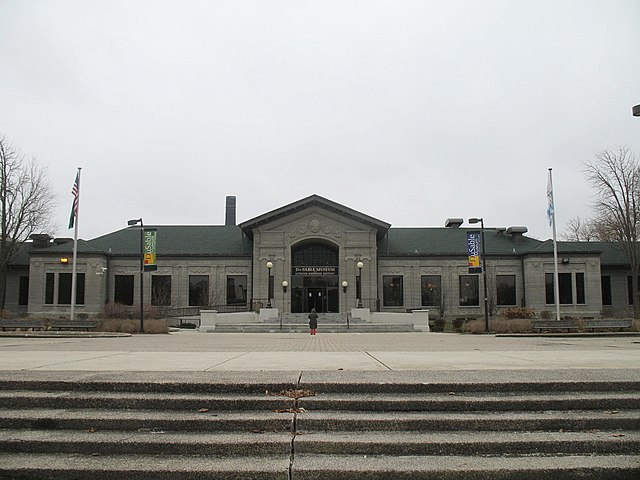 In early December, My Own True Love decided to make a long overdue visit to The DuSable Museum of African-American History, which is located roughly six blocks from our house. * We gave ourselves two hours, with the promise that we would return if necessary. And it will definitely be necessary. We only got through part of one floor, and we missed what looks like a spectacular immersive exhibit on the 1963 march on Washington.**

I had visited the museum thirty years previously, when my undergraduate advisor was in town.*** I had vivid memories of crowded display cases and exhibits with a homemade feel that were both passionate and heartbreaking. And it told the stories that were not told in most (maybe any) historial museums thirty years ago—including the first substantive exhibit I had ever seen about the Middle Passage. As a whole, the museum reminded me of a underfunded small town local history museum, held together by glue sticks and dedication.   A lot has changed in thirty years, in terms of the history we tell and the technologies we use to tell it.

We didn’t know it at the time, but the museum was celebrating its 60th anniversary. As a result, the first exhibit we saw was dedicated to the career of artist/educator/activist Margaret Taylor Burroughs, who founded the museum, then the Ebony Museum of Negro History and Art, in her home in Chicago’s Bronzeville in 1961. To my shame, I had never heard of Burroughs, who was a major player in Chicago’s Black Renaissance.  I was fascinated, and I intend to seek out more of her artwork. Her black and white prints are powerful.

I made it through two additional exhibits. The first looked at the role of Black soldiers in the United States army from the American Revolution through WWI, focused in part through the experience of Illinois units. It included excerpts from letters from an officer in WWI , which were fascinating and (again) heartbreaking. It took a side trip into the experience of three Black women who were YMCA volunteers in the war, which was worth the visit all by itself. (And possibly a blog post. ) And it ended with Chicago’s experience of the Red Summer of 1919, after the troops came home. The second told the story of Harold Washington’s term as mayor of Chicago, using an animatronic figure of Harold Washington in his mayoral office and news footage from the time. It’s a period of Chicago history that I lived through, and followed avidly . The first exhibit made me angry. The second made me cry, just as I cried at the time of Washington’s death.****

I have no idea what exhibits are located on the lower floor. I don’t plan on waiting another thirty years to find out.

* The museum is named after Jean-Baptiste Pointe DuSable, the Haitian-born son of a French mariner and an enslaved woman of African descent, who was the first non-indigenous person to settle at the site that would become Chicago.
**One of the security guards spoke to each person as they left the exhibit ,“Did you cry?” he asked. “I cry every time I see it.”   (As an aside, I’ve never seen such friendly, helpful security guards in a museum.  They acted like hosts.)
***I am sure I am not the only one who has been inspired to visit a local attraction by the wishes of an out-of-town visitor.
****Is anyone else finding historical museums deeply moving these days, even when they include slightly creepy animatronic figures? Or is it just me?