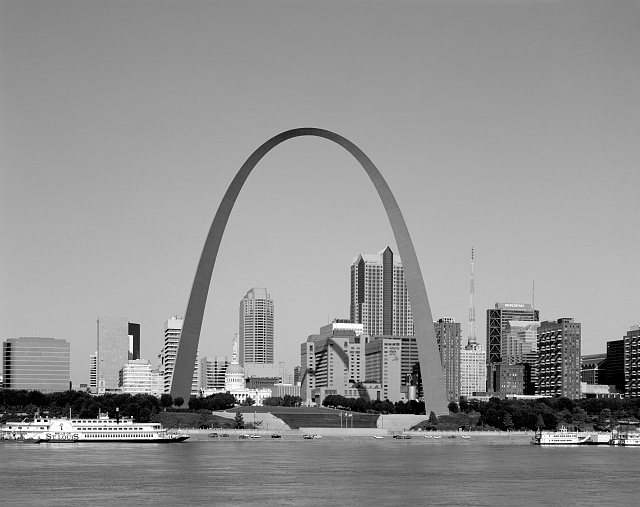 I must begin by admitting that it is possible to drive from Chicago to Springfield Mo in one day. I have done it alone and with My Own True Love many times. But when faced with the prospect of the drive this past Christmas we looked at each other and admitted that we were tired. Really, really tired. Instead of sucking it up and pushing through, we decided to overnight at Saint Louis and spend a couple of hours the next day at the small museum at the base of the Gateway Arch. It was a really good decision

The museum has been completely renovated since we last visited it—thirteen years ago almost to the day. What a difference a decade makes!

The Arch is located at the confluence of the Mississippi and Missouri Rivers, a site which had been important to America’s history since the days of Cahokia. When the location was named a National Historic Site in 1935, it was intended as a monument to westward expansion. The museum in its current form offers a more complex version of that story.

The exhibit is divided into six sections, titled

Despite the tone of the titles, each section, with the exception of “Building the Arch,” was designed to look beyond the story of westward expansion as it was taught in my school years. Women, people of color, and Native Americans are explicitly included, both in the form of individual biographical panels and in discussions of how the expansion of the United States into the west affected their lives and their rights. (I was stunned by a series of panels that laid out the effects of the Louisiana Purchase. Basically everyone living in the region prior to the Purchase lost rights and economic opportunities.) One of the central ideas is how experiences of westward expansion differed, summed up in a triple panel with the titles “How the West Was Won”, “The North Was Taken From Mexico”, and “The West was Stolen”.

I came away with new insights into stories I thought I knew and stories I had never heard.*

The museum is well worth a stop, even if you have no interest in taking the tram ride to the top of the arch. (Which we did not.) Be sure to leave time for the bookstore, which has an excellent selection of books that reflect the themes of the museum.

Once again, the National Park Service does not disappoint.

*How many times have I said something similar in ten years of blog posts? “So Much I Don’t Know” could be the subtitle of this blog.