I recently did a major sort-and-purge of the unread non-fiction in my study. Once again, I had accumulated piles of books on the floor in front of the bookshelves where the un-read non-fiction lives.  In order to put books on the shelves, I had to get rid of books that I had no intention of reading. There were a shocking number of them. In the process I discovered books that I had carried from home to home on my last two moves, duplicates,(1) and piles of books that had not even registered on my brain before starting the project. I also discovered books that I didn’t remember acquiring, and didn’t remember why I wanted to read them.(2)

In the process, I re-prioritized what I wanted to read next, at least for the moment.(3) On Juneteenth by Pulitzer-prize winning historian Annette Gordon-Reed jumped to the top of the list. And I am so glad it did. 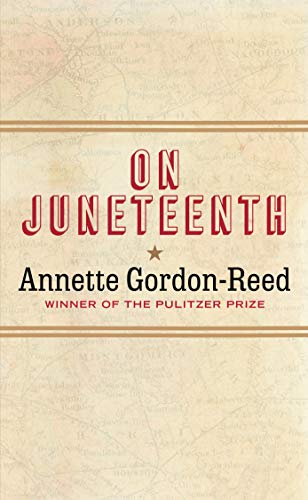 On Juneteenth is a small book—141 pages only slightly bigger than those of a mass-market paperback— but it makes a big impact. Or at least it made a big impact on me.

Gordon-Reed begins with a confession: she was mildly annoyed when she first learned that people outside of Texas were celebrating Juneteenth, which she had always thought of as a uniquely Texan holiday. She ends the main body of the book with a description of her family’s celebration of Juneteenth during her childhood. In between, she discusses the nature of Texan exceptionalism(4), the central role of slavery in the incursion of Americans into what was then part of Mexico and their subsequent rebellion against Mexico, past lynchings in the community in which she grew up, and why Texas proved exceptionally (there’s that word again) resistant to changes in the status of its new Black citizens after the Civil War. She considers the impact of origin stories on the history we tell and are told—and counterpoints stories told within the Black community in her hometown with the “official” versions. She explores how stereotypical ideas about language have distorted our understanding of the lives of historical Black Americans and the impact of integration on Black teachers. She untangles myth and legend, and interweaves the whole with anecdotes from her own family.

The result is an eye-opening account of American history, with Texas as its lens. As Gordon-Reed puts it, “The American story is, indeed, endlessly complicated.”  That’s worth remembering.

(1)In some cases, duplicates of books I had no intention of reading. *Sigh*

(2) Assuming I did want to read them. One of the perks of writing this blog is that people send me books hoping I will review them.

(3) There is always an element of serendipity to this process. And I like it that way.

(4) A fascinating variation of the idea of “American exceptionalism”, a phrase first used by Alexis de Tocqueville in his nineteenth century masterpiece, Democracy in America (5). Since de Tocqueville, “American exceptionalism” has been used by proponents of virtually every shade of political thought to explain America’s political history, recent events notwithstanding.

(5) A copy of which sits unread on my shelves, waiting its turn.

In case you missed the memo, March is Women’s History Month.  We’re going to celebrate Women’s History Month here in the Margins the same way we’ve celebrated for the last three years, with a series of mini-interviews with people who write about or otherwise work with women’s history. Unlike the rest of the year, there will be new posts Monday through Friday. (If you want to rev yourself up, you can read all the previous interviews here.)

I’ve got a great mix of people lined up to talk about a wide range women, from medieval queens to twentieth century madams. It’s going to be Big Fun!

And speaking of medieval queens, our first guest will be Shelley Puhak, whose book The Dark Queens tells the little known story of two queens in the early Middle Ages, Brunhild and Fredegund, whose rivalry shaped medieval Europe.  It’s a wild ride of a story.  If you can’t wait until March 1st, Shelley and I will be talking about The Dark Queens, and possibly a few women warriors, on a virtual event hosted by Prose and Politics.  You can find the details here.