Moving south along the river, we stopped to visit the Toolesboro Mounds site, outside Wapello, Iowa, because I am a sucker for the Mound Builders and My Own True Love is a good sport. The site was interesting enough, but it paled in comparison to a memorial across the street.* 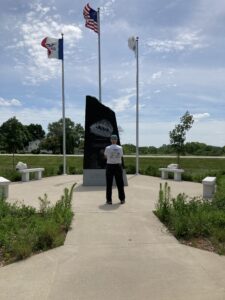 The Littleton Memorial is a privately maintained monument to the Littleton brothers, six brothers who died in the American Civil War. They are the largest single group of siblings known to have died in any single American war. One died in battle. One died of wounds sustained in battle. Two died of the illnesses that plagued army camps. One died at Andersonville Prison while a prisoner of war. One died as a result of an accident during troop movements. In some ways, their deaths  present a microcosm of America’s losses in the war.

A descendant of one of the brothers was tending the grounds when we stepped across the street to look at the monument and we had a chance to talk to him. It turns out that the story of the memorial is as interesting as the story of the brother. At least to those of us who are interested in how history is preserved.

It turns out that the family had forgotten the story. It came to light again in a variation of the “lost documents in the attic” that every historian dreams of. A woman named Olive Mary (Kemp) Carey who was born in the area, subscribed to the local paper for her entire life as a way to keep in touch with her hometown. In 2010, her family reached out to the local historical society to see if any one was interested in her scrapbook. Someone there rightly said “” “yes please.” Going through the clippings, a member of the found a “Local History” column from 1907 talking about men from the county who had served in the war, including the tragedy of the Littleton family.

It took a lot of work to get from that clipping to today’s monument to loss and memory.

*In all fairness, The Toolesboro Mounds interpretive center does a very good job in a limited space of describing what we know about the Hopewell culture . It does an even better job of describing the discovering of the Toolesboro Mounds in the mid-nineteenth century and the changing relationship of archaeologists to the mounds over time. (It will not surprise you to learn that I was particularly taken with the career of Mildred Mott Wedel, 1912-1995, one of the women to work as a professional archeologist.) Not much new if you are familiar with mound builders sites, but a good introduction if you are not. 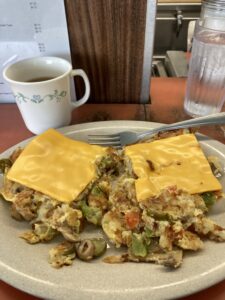 If you are in Burlington Iowa for breakfast, I highly recommend Jerry’s Main Lunch, where their motto is “No great adventure ever started with a salad.” The posted menu is limited, but within minutes of ordering the “regulars” sitting next to us at the counter let us know that there were lots of “secret” variations available. I ordered the original “hot mess”. It was so delicious that I’d have gone back for lunch if we hadn’t been on our way out of town.