The Second Anglo-Boer War (1899-1902) started badly from the British point of view.  British troops, supposedly the best trained and best equipped in the world, suffered a series of humiliating defeats at the hands of Boer farmers.  (Anyone else hear echoes of another colonial war that pitted farmers against British regulars?) 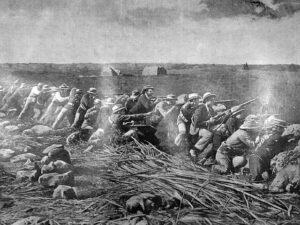 Boers firing from their trenches at Mafeking, from The Graphic 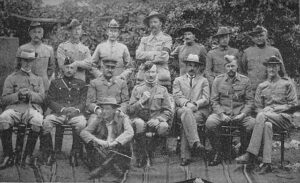 The only bright spot in the morass of inefficiency and disaster was Colonel Robert Baden-Powell’s spirited–and well-publicized–defense of Mafeking, a small town on the border between British and Boer territory. (Yep.  The guy who founded the Boy Scouts.)

The siege lasted for 219 days. Undermanned and inadequately armed, Baden-Powell improvised fake defenses, made grenades from tin cans, and organized polo matches and other entertainments to keep the garrison’s spirits high.  The British public was able to follow “B-P’s” defense of Mafeking because the besieged town included journalists from four London papers, who paid African runners to carry their dispatches through the Boer lines.

When news of the garrison’s relief reached England, public celebrations were so exuberant that “maffick” became a (sadly underused) verb meaning to celebrate uproariously.

Maffick vt.  To celebrate an event uproariously, as the relief of Mafeking was celebrated in London and other British cities.

So, have you mafficked something recently?

Posted in African History, Imperialism, Military History, Word With a Past and tagged Boer War, word with a past