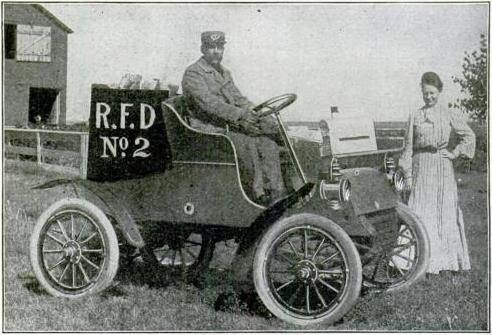 Every time we take a road trip, we miss one or two or twelve things we would like to see because they were closed for the season,* or we hit town on the wrong day, or we had the wrong directions,** or we just plain ran out of steam.

In the case of the Rural Free Delivery Postal Museum, in Morning Sun, Iowa, we made an attempt to set up an appointment, but the telephone number on the website was dead. And it was a little too far out of our way to take a chance and just stop by.

But the story the museum celebrates is just too good not to share:

Home mail delivery is something we take for granted in the United States .*** But in fact, it is a relatively new service. Free mail delivery began in cities in 1863. Rural postal customers—who made up the vast majority of the population at the time— weren’t so lucky. They paid the same amount for stamps as city folk, but they still had to pick up their mail at sometimes distant post offices or pay private companies to deliver it.

In 1896, after several years of advocacy by the National Grange**** and discussion by Congress, Postmaster General William L. Wilson agreed to test the idea of Rural Free Delivery. The service began on October 1, 1896, when five men on horseback set out to deliver mail along ten miles of mountain roads outside Charles Town, Halltown, and Uvilla West Virginia. (Perhaps it was not by chance that West Virginia was Wilson’s home state.) Within a year, the post office serviced 44 routes in 29 states. (The service was so new that regulation mailboxes did not exist. Farmers nailed improvised receptacles on fence corners, including old boots, tin cigar boxes, and shoe boxes.) Customers across the country sent more than 10,000 petitions asking for local routes.

On a related note: The RFD Museum wasn’t the only postal moment on our trip. When we stopped at the Pine Creek Grist Mill in Muscatine County, Iowa, we learned that the gentleman who founded the mill in 1834 was licensed to run the first post office in the county. The mailing address for any letters coming through the post office was the same: Iowa Post Office, Blackhawk Purchase, Wisconsin Territory. I had never thought about how letters would be addressed on the frontier. Suddenly it became clear to me just how amazing it was that people could send letters to someone who had left home and moved west.

*Word to the wise: If you take a road trip through Minnesota in late September you will miss a lot of stuff.
**As I mentioned in an earlier post, if you want to visit the New Philadelphia archeological site, do NOT put New Philadelphia, Illinois in your GPS. It will take you to an existing town in the other direction.
***Or at least we did until recently.
****For those of you who don’t know: The National Grange of the Order of Patrons of Husbandry, commonly known as The Grange, has been providing support for American farmers since 1867.  Originally designed to help rural America recover from the devastation of the Civil War, “Grangers” fought discriminatory railroad pricing, established local buying cooperatives, and, yes, fought for rural mail delivery.  Local Grange Halls were often the social heart of rural communities places and worked with Farm Bureaus, Extensions Services and 4-H clubs to educate farm families about the newest methods of farming and household management. Today the Grange is still an active advocate for family farms. Cooperative action at its best.