Recently My Own True Love and I were discussing aviation history over dinner, as happens more often than you might think. My recent blog post on the Hat in the Ring Squadron had led us to talking about Eddie Rickenbacker. As we pooled what we knew, we realized that there was more to his story than being a World War I flying ace.

Rickenbacker was already a minor celebrity before he gained fame as “America’s Ace of Aces” in World War I.

He was born in 1890 in Columbus, Ohio, the son of Swiss immigrants. His father was a day laborer. He died in a construction accident when Rickenbacker was twelve. Rickenbacker later wrote, “that day I turned from a harum-scarum youngster into a young man serious beyond my age.” In order to support his mother and four younger siblings, he took on any job he could find. He sold newspapers, eggs and goat’s milk. Always looking to earn more money, he worked in a glassmaking factory, a foundry, a brewery and a monuments works. In 1906, he got a job working as a mechanic for Lee Frayer, a race car driver who was an owner of the Frazer-Miller Automobile Co. Engines and cars became his passion. In 1912, he became a race car driver in his own right and soon earned a reputation for daredevil driving. (He set a world speed record at the Daytona 500 in 1914.)

When the United States entered the war in 1917, Rickenbacker volunteered. Not surprisingly, he wanted to learn to fly.* Celebrity or not, he didn’t fit the criteria. At 27, he was too old for the army’s pilot training and he didn’t have a college degree. Because of his fame as a race care driver, he was sworn into the army as a sergeant rather than as a private and given the assignment of chauffeur to Colonel William “Billy” Mitchell, now considered the father of the United States Air Force. Mitchell, himself a pilot, was the chief of the Air Service of the First Army. Rickenbacker pestered his new boss (and lied about his age) until he was approved to apply for flight training. 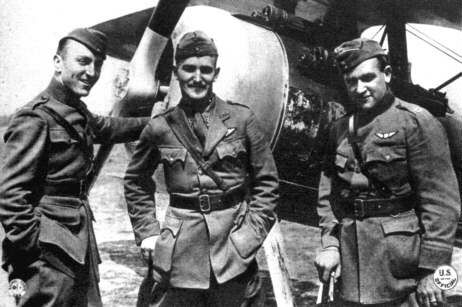 Not surprisingly, the race car driver was a natural pilot, though he was afraid of heights and had to overcome a dislike for aerobatics. Seventeen days into his flight training, he was promoted to lieutenant and assigned to the 94th Aero Squadron, also known as the Hat in the Ring Squadron. At first he didn’t fit in to the squadron, which was largely made up of Ivy League college graduates. (One of them described him as a lemon on an orange tree.) Rickenbacker was older than the rest of the squadron, did not have a college degree of any kind, and had a distinct Swiss accent courtesy of his parents. His colleagues considered him a country bumpkin with no social graces and a tendency to throw his weight around. (So much for the value of celebrity.)

He may not have been immediately popular with the rest of the squadron but he soon became a darling of the American press, which dubbed him America’s Ace of Aces. He enjoyed his first victory on April 29, 1918, in conjunction with another member of the squadron. He was made squadron commander on September 25, and was promoted to captain by October 1. By war’s end, he had scored 26 aerial victories,** survived 134 encounters with German pilots, and flown 300 combat hours, more than any other American pilot in the war. He earned a Medal of Honor and the French Croix de Guerre.

When Rickenbacker left active duty, he was promoted to major, a title which he refused to use. Instead, he continued to use the title captain, which he felt he had earned.

After the war, Rickenbacker was an important player in both the automobile and aviation industries and continued to make headlines with heroic adventures, including making a thirteen-hour coast-to-coast flight in the Douglas DC-1 to protest using army pilots to deliver the mail*** and surviving 22-days in a rubber life raft in the Pacific when the B-17 on which he was a passenger ran out of fuel. An event that deserves its own blog post. Don’t touch that dial!

*He had taken his first airplane ride only six months earlier.
**Or 24.33 if, like the U.S. Air Force, you only give him partial scores for shared victories.
*** Rickenbacker described it as “legalized murder” because Army pilots were dying on the mail routes. Rickenbacker’s protest played a large role in the creation of the Civil Aviation Authority.

In which I realize that Oscar Mayer was a real person

I am embarrassed to admit that until recently it never occurred to me that Oscar Mayer was a real person. After all, Betty Crocker, who played a much larger role in the kitchen of my childhood, was a fictional character.  In fact, I didn’t even think about him as a fictional person. Oscar Mayer was just a pair of words in a jingle. [WARNING: Clicking the video below may produce an ear worm.]

Imagine my surprise when he started popping up in Sigrid Schultz’s papers as a successful Chicago businessman who had been a friend of her father’s and who she viewed as a uncle of sorts.

Mayer emigrated from Bavaria to the United States in 1873, at the age of fourteen. He started working in Detroit as a butcher’s boy, then moved to Chicago.* With the dream of opening his own business, he asked his brother Gottfried, who was still in Germany, to study sausage-making. In 1883, he opened his first store, Oscar F Mayer and Bros. From that small beginning he went whole hog into the meat business. (Sorry. Sometimes I can’t help myself.) 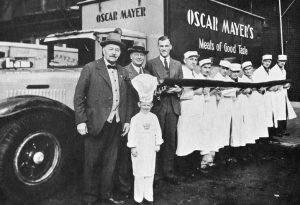 There was a thriving market for high-quality sausages in Chicago. Soon the brothers became more than a neighborhood butcher. They used a horse-drawn wagon to deliver sausages throughout the city, taking what was then the unusual step of creating brand names for their products so that customers could ask for them by name. By 1904, Mayer employed eight salesmen who covered a territory with more than 280 grocery stores. Fifteen years later, the company purchased a farmer’s cooperative meat-packing plant in Wisconsin that allowed them to triple their sales.

All this makes me wonder whether there was a Sara Lee? A Chef Boyardee? A Mrs. Butterworth? (For the record,  Colonel Sanders was for real.)

*Which was, after all, hog butcher to the world. 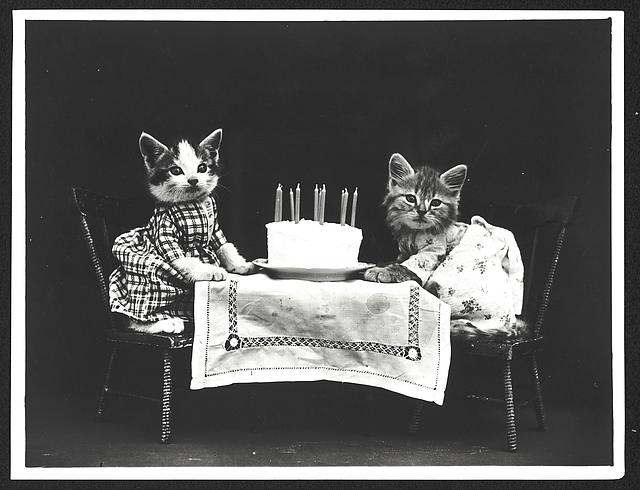 It’s hard to believe we’ve been hanging out here on the Margins for ten years now. This blog started out as an experiment. It quickly turned into a conversation. (As far as I know, that first post had only three readers: my dad, My Own True Love, and my BFF from graduate school. Now there are some 3000 of you.)

Back in March, I blithely promised you a History in the Margins Top 10, without any sense of what that would mean. Luckily, quite a few of you took me up on my invitation to make suggestions about what should be on the list. Because how on earth could I chose ten out of a thousand?

The posts I’ve linked to below may not be the ten best posts I’ve written in the last ten years. But they are ten posts that you have enjoyed. Which makes me very happy.

In no particular order:

2. The Thrill of the Vote (Some of you sharp-eyed folks  may notice that this first appeared in 2008.  That's true.  It originally ran as a guest post on someone else's blog.)

5. Florence Nightingale Does the Math

6. Al-Khwarizmi Does the Math

7. Napoleon on the Art of War:

8. Word with a Past: Silhouette

10. Road Trip Through History: Lake Itasca State Park and the Headwater of the Mississippi 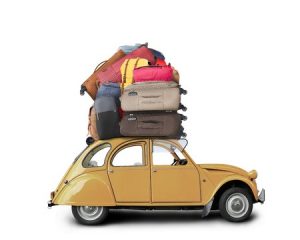 And speaking of Road Trips Through History, I’m going to cheat and give you a link to an entire category instead of a single post as a lagniappe. As I read through posts from the last ten years, I realized that an extraordinary number of my personal favorites are about places we’ve visited on our travels. (This may be because I’m eager to hit the road again after a year of no travel, no museums, and not historical markers.) Road Trip Through History posts have been part of History in the Margins from the beginning. In my third post, I described what I like in a road trip: Road Trip Through History: The Utopian Communities of New Harmony.  I clearly had no idea that it would be the first of many posts about our history-nerd adventures. If this is the kind of thing you like, you can find all of the Road Trip Through History posts here.  With any luck we'll be hitting the road again in a few weeks, and I'll have more history-nerd adventures to share.

Thanks to you all for reading along over the last ten years.  I'm looking forward to many more.