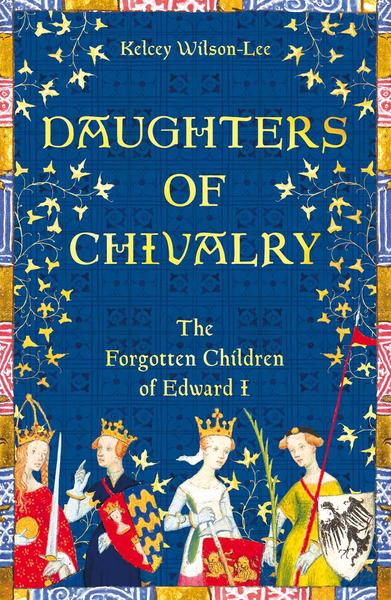 In Daughters of Chivalry: The Forgotten Princesses of King Edward Longshanks, historian Kelcey Wilson-Lee tells the stories of the five daughters of Edward I of England and his first wife, Eleanor of Castile, who survived into adulthood: Eleanora, Joanna, Margaret, Mary, and Elizabeth.

I’ve got to say the book has a shaky start.  Wilson-Lee sets up a questionable and unnecessary straw woman in her introduction:  a “popular” vision of medieval princesses as powerless and passive that she describes as built on “an empire of fairy stories, Hollywood films, theme parks and cheaply produced ball gowns.”  Personally, I’m not sure anyone believes in the powerless princesses she describes–not the little girls who wear those ball gowns with attitude* and certainly not anyone who would chose to read a book titled Daughters of Chivalry.  Maybe that version of princesses existed once upon a time, but my own memory of fairy tales includes a fair number of princesses who used every ounce of power they held to control who they married–something only one of the real-life medieval princesses in Daughters  of Chivalry managed to control.

That quibble aside, Daughters of Chivalry is an excellent book.

Like even the most elite medieval women,  Wilson-Lee’s  princesses left a spotty trail in the historical record, most often appearing in official chronicles in the context of their relationship with one of the men in their lives.   She fleshes out the picture of their lives using a variety of sources—most notably the account records for the various royal households**—plus a certain amount of informed speculation.

Wilson-Lee uses her sources to good effect.  She creates portraits of five clearly defined individuals. Joanna, for instance, frequently defied her father and took full advantage of the opportunities accorded to a young, wealthy widow in medieval society. Mary, who entered the convent of Amesbury at the age of six, had a taste for luxury and a gambling habit at odds with her vow of poverty. She also places the sisters within the larger context of royal women in the late medieval period, exploring questions of education, marriages (political and otherwise), widowhood, property, travel, and the role of royal women as political intercessors. Like the women she describes, Wilson-Lee never loses sight of the fact that what power these women enjoyed was derived from their relationship to the king, but she fully explores the nature of that power and how they used it.

*A year or two ago, I saw a little girl stomping through the aisles of my local grocery store wearing hiking books with a princess gown and carrying a sword.  I’m pretty sure she didn’t share Wilson-Lee’s “popular” vision of princesses.

**The nature of her sources means there is a lot of description of real-life princess dresses.  This is not a complaint.  Just an observation.

Back in March, I celebrated Women’s History Month here in the Margins with a series of mini-interviews with people who are involved in creating and studying women’s history. A lot of you seemed to enjoy it.  (I know I did.) So I’m thinking about doing it again in 2020.  If there is someone you think would be a good fit, let me know.