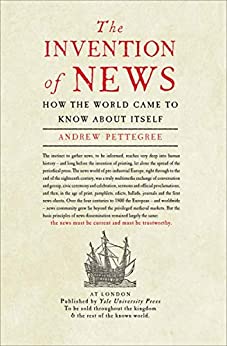 Building on his previous work in the ground-breaking The Book in the Renaissance,* Pettegree demonstrates how access to news became increasingly widespread, moving from private information networks run by medieval elites, through sixteenth century news pamphlets and news singers, to the newspapers of the eighteenth century. He looks at the development of postal systems, private couriers and the printing press. He considers the importance of the introduction of paper, the rise of coffee shops and the growth of a literate middle class. He discusses the roles played by news pamphlets in the Reformation and by newspapers in the American and French Revolutions.

Some of the most interesting sections of The Invention of News deal not with the development of new media, but the creation of new audiences. Technology often outpaced demand. Early printers, finding the traditional market for large books would not keep them solvent, created new markets for more ephemeral products. The first newspapers were bewildering to audiences accustomed to news pamphlets that told a single story from beginning to end. Perhaps, at some level, the medium is the message.

* Also well worth reading. Printing and the Protestant Reformation are more closely linked than you might think.