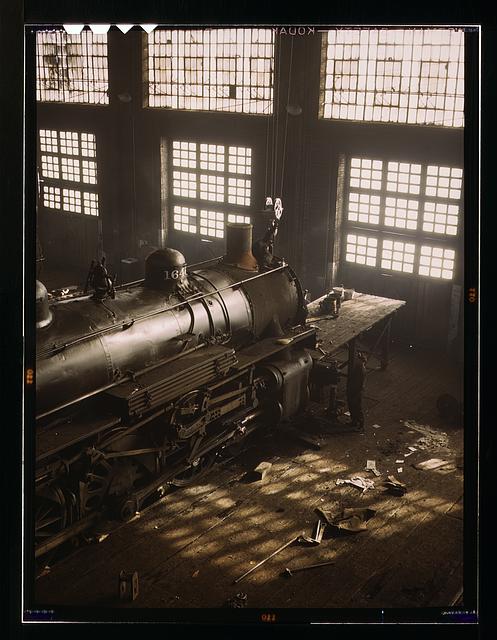 What with one thing and another,* My Own True Love and I haven’t made it to many museums in the last few months. Last week we made an exception. The current exhibit at the Chicago History Museum looked too good to miss. Some of our favorite things– history, art, and railroads–together in one place. In fact, Railroaders: Jack Delano’s Homefront Photography exceeded our expectations.

When the United States entered World War II in 1941, Jack Delano was a photographer with the Farm Security Administration–the same government agency that hired Walker Evans and Dorothea Lange to document poverty in rural America. He took pictures of coal miners in Pennsylvania, African Americans in Georgia, and small farmers in New England. His work as a whole was marked by an awareness in the dignity of working people and a fascination with the idea of diversity.

In 1942, Delano received an assignment from the newly-formed Office of War Information to take pictures that would tell the story of railroad workers as a critical element of the American war effort: soldiers of the homefront. Over the course of four months in 1942-1943, he took more than 3000 photographs of America’s railroad workers, two-thirds of them in Chicago, the heart of the nation’s rail industry. The work he produced went far beyond its purpose of morale-building propaganda. At their best, Delano’s photographs combine the moral authority of Evans and Lange’s best work with lighting reminiscent of Rembrandt or the impressionist. (One photograph in particular made me think of Claude Monet’s Gare Saint-Lazare.)

The Chicago History Museum has done an excellent job of using works of art to explore a historical moment–appropriate since Delano never forgot that the point of his work was to tell a story. His photographs are combined with brief biographies of the workers who portraits he took, explanations of how the war changed their work, railroad artifacts, and a montage of propaganda film clips, collectively titled “Railroaders for Victory”.** They also include a few interactive exhibits and make an unusual plea for the visitor to take pictures and share them on social media:

(I couldn’t resist.  Obviously My Own True Love was meant to be a railroad man.)

Railroaders runs through August 10. If you’re going to be in or around Chicago, it’s worth taking the time to see–especially if you’re interested in photography, railroads, or World War II. If a visit to the exhibit isn’t in the cards, you can still see Delano’s photographs. Since his work was produced for a government agency, you can find his photographs on the Library of Congress website.*** Even easier, check out the Delano page on the Shorpy Historical Photo Archive.

**While I was watching the clips, the man next to me gave a sad smile and said “It’s too bad we can’t mobilize our forces the same way to solve a peacetime problem, like poverty or pollution.” Something to think about.

***The search function is unwieldy, but there’s gold in there if you’re willing to take the time.