People often visit the English Cemetery* when they go to Florence. The final resting place of prominent nineteenth century inglesi, including Elizabeth Barrett Browning, the cemetery is by all accounts a beautiful park in a city that already teems with beauty. 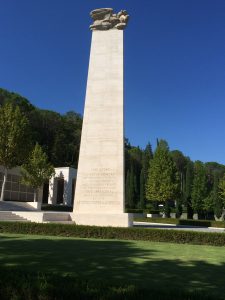 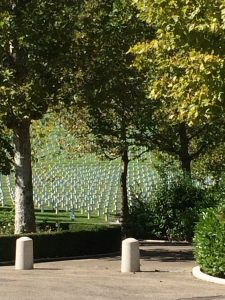 It was on our list of possibles, but when push came to running out of time we chose the American Cemetery instead. Where the English Cemetery holds the graves of self-selected nineteenth century expats, the American Cemetery honors an involuntary group of expatriates: 4398 American soldiers who died in the Allied campaign to liberate Italy in World War II. The cemetery site was taken by the US Fifth Army on August 3, 1944 and was subsequently granted for use as an American burial ground by the Italian government **

When I think of Florence and history, I think of the Renaissance. I don’t think about World War II. This is, of course, ridiculous. When you are in Florence, subtle reminders of the war are everywhere. Stories of museum curators and librarians who protected treasures of Renaissance art. Bridges that no longer exist because retreating German forces destroyed all of the bridges across the Arno except for the Ponte Vecchio, which was spared at the last minute.*** (Instead they blocked access by destroying the medieval buildings at either end of the bridge.) Tales of collaboration, resistance and the tricky balancing act in-between.

There is nothing subtle about the American Cemetery, which is made up of seventy acres of beautifully maintained graves and an imposing monument that tells the story of the Allied push from northward from Rome to the Alps. It is breath-taking, impressive, heartbreaking. But the thing that got me right in gut was the guest book. Most of the visitors who signed in were not American but Italian. And in the comments section one of them wrote a single word–grazie. Thank you.

*Yet another historical misnomer, like Prince Henry the Navigator or the Silk Road. The cemetery was founded in 1827 by the Swiss Evangelical Reformed Church and originally named the Protestant Cemetery. But the over the course of the century the size of the Anglo-Florentine community grew. So did the number of English (and American) Protestants who needed a final resting place.

** The American Battle Monuments Commission maintains American cemeteries and memorials, including the cementery in Florence, in sixteen countries.

***Tour guide history attributes this to a personal order from Hitler. I suspect this is comic-book history, but I don’t really know.