Today I’m making an exception.**But recently I had the opportunity to interview Daisy Goodwin about her newest novel, Victoria, and the BBC series she created based on the same material.*** The book was not only a delight, it forced me to think about the line between history and fiction.

Daisy Goodwin, author of The American Heiress and The Fortune Hunter, has a reputation for making the nineteenth century come alive. Her historical novels feature impeccable research, an eye for telling details, and strong female protagonists. In her latest novel, Victoria: A Novel of a Young Queen, she tells the story one of the strongest and least Victorian female characters of the era—Queen Victoria herself.

Alexandrina Victoria came to the throne less than a month after her eighteenth birthday. No one expected her to be a powerful, or even competent, ruler. Not only was she young, but she was tiny, virtually unknown, and woefully inexperienced. Her childhood had been more than sheltered—prior to her accession to the throne her mother, the Duchess of Kent, and her mother’s favorite, Sir John Conroy, controlled every aspect of the princess’s life. Drina, as her mother called her, was not allowed to play with other children, attend social events, or even walk down the stairs unsupported.

The young queen stepped into her new role as the most powerful monarch in the world with determination and dignity. Her first act was to insist that she be called Victoria. A seemingly small decision, but one with enormous symbolic significance. In rejecting her mother’s childhood nickname for her, Victoria declared her independence.

As Goodwin makes clear, that independence was regularly challenged at the beginning of Victoria’s reign. The young queen was surrounded by people who wanted to co-opt her for their own ends. Her mother and Conroy struggled to retain positions of power in Victoria’s household. Her paternal uncle, the Duke of Cumberland, schemed with Conroy to have her declared insane so he could be named regent. Her maternal uncle, King Leopold of Belgium, hoped to become the power behind the British throne—a position he would have held as the husband of Victoria’s late cousin, the Princess Charlotte. Even Lord Melbourne, who became Victoria’s most trusted advisor, began their relationship with the intention of creating a queen from a girl with no political education.

Victoria takes place over the first two years of Victoria’s long reign, from the moment she learns she is queen through her marriage proposal to Prince Albert. Goodwin tells the story primarily from Victoria’s perspective, drawing on the queen’s voluminous personal journals.****  The result is a compelling account of a young woman navigating her way through political intrigue, family drama and unexpected romance.

Goodwin brings a firm understanding of the historical events surrounding Victoria’s accession to the story, but the power of the book comes from her treatment of personal relationships and her exploration of Victoria’s character. The portrait of Victoria that Goodwin paints is a far cry from the popular image of the queen as a stout old woman who was not amused.***** Goodwin’s Victoria is by turns innocent, shrewd, and passionate. She loves to dance, has an eye for a good-looking man, and is, in fact, often amused. 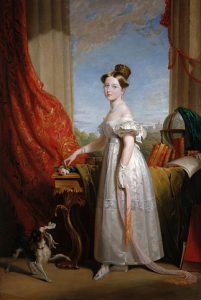 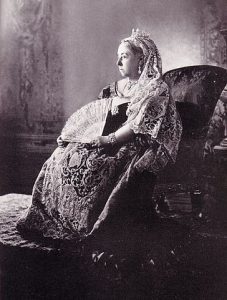 Goodwin leads the reader through Victoria’s development as both ruler and woman. At the beginning of the novel, Victoria still talks to the doll that is the closest thing she has ever had to a childhood companion and is overwhelmed by the boxes of correspondence that arrive on her desk as soon as the death of her uncle, King William IV, is announced. Over the course of the book, she learns the business of government, finds allies (sometimes in unexpected places) and discovers how fragile royal popularity can be. She recreates the physical trappings of royalty to fit a woman who was less than five feet tall. (It’s hard to be dignified when your crown is too big and you sit on your throne like Edith Ann on her sofa.) She identifies with Queen Elizabeth I and sees her as a role model.

Goodwin skillfully walks the fine line between history and fiction in her portrayal of the relationships between Victoria and those around her. She takes the historical facts of Victoria’s troubled relationship with her mother, her loathing for Conroy, and the friendships she develops with her ladies-in-waiting—friendships strong enough to precipitate the political crisis known as the Incident of the Bed Chamber—and brings them to life in ways that illuminate Victoria’s choices. She makes a more daring choice in her treatment of the relationship between Victoria and her favorite Prime Minister, Lord Melbourne.   The nature of that relationship has been a matter for speculation almost from the beginning. Goodwin comes down heavily in favor of an unrealized romance between the two. Her treatment of the romance is historical fiction at its best: woven from hints and details to create a believable whole. Whatever the truth of Victoria’s relationship with Melbourne, Goodwin’s treatment of it provides a bittersweet bridge to Victoria’s undoubted romance with the man who would become her husband, Prince Albert.

Ultimately, Victoria is a coming-of-age story. Its emotional arc is summed up in two sentences early in the in the novel. Goodwin uses a real-life scandal from early in Victoria’s reign, the Flora Hastings incident, as a turning point in the queen’s development. As Lady Flora lays dying, she tells the young queen who has wronged her, ” Your subjects are not dolls to be played with. To be a great Queen, you must be more than a little girl with a crown.”

It’s a lesson that Goodwin’s Victoria takes to heart.

**If any publicist who’s offered me a review copy of a historical novel and gotten a polite “no thank you” is reading this, all I can say is my blog, my rules.

***The first episode airs in the United States on January 15.  Check your local PBS station for details.  I plan on watching.

****She wrote more than 62 million words of diary entries over the course of her lifetime.  My hand aches at the thought.