At the moment, I’m deep in a chapter about women who disguised themselves as men and enlisted as soldiers–the subject of the blog post below.

I know a lot more about the subject than I did when I wrote this post back in 2013. And while I still think all their stories sound much the same, I’ve come to believe that’s an important part of the story. 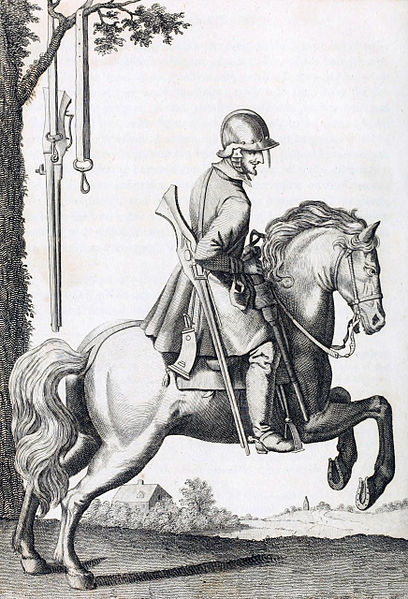 (In case it’s not clear, this is NOT a picture of Madeleine Caulier. It is a generic picture of a dragoon.)

I’ve been fascinated for a long time by real-life stories of women who disguised themselves as men and went to war at times when women didn’t go to war.* About ten years ago, I began to collect examples, thinking I could write a book, or at least an article, about the subject. I quickly gave up the idea. There were too many examples, from the medieval period through World War I.

What’s more, their stories all sounded the same. For one reason or another** our heroine disguises herself as a man*** and enlists. She makes it to the front, where she serves valiantly. She is only discovered to be a woman when she is wounded or dies in battle.**** Presumably more served who were not discovered.

I recently stumbled across an example with a different twist: Madeleine Caulier.

Caulier worked at an inn outside the city of Lille during the War of the Spanish Succession. As in most all-out European wars, the Low Countries were hotly contested territory. In August, 1708, Lille became the site of a long, hungry siege. The French were desperate to get supplies and information in and out of the city.*****

Caulier’s brother served in the French garrison. For reasons that are not clear to me, she was allowed to cross the lines to visit him. (For those of you who are always alert to the passive voice, let me assure you I deliberately chose it in this case because I don’t know who was fool enough to allow her to go in and out of the city. Did she get permission from an officer? Talk her way through a checkpoint? Did someone assume she was harmless? Was bribery involved? This is one of those times when the documents leave the juice out of the story.) When they learned she had access to the city, French officers asked Caulier to smuggle messages to the commander of the garrison. (In some versions of the story, she overheard them talking and volunteered.) She agreed, on the condition that she be allowed to enlist in a dragoon regiment as a man. I would say she had balls–but the whole point of the story is that she didn’t.

The count d’Évreux granted her request–making her the only example I’ve seen of a woman who was officially allowed to disguise herself as a man and enlist. She remained in the army until her death at the battle of Denain in 1712.

Today a street in Lille bears her name. Anyone know of another woman soldier in disguise who’s been honored in some way?

* I’m not the only one fascinated by this historical trope. Terry Pratchett wrote a hysterical novel based on it: Monstrous Regiment. I won’t say more for fear of spoiling the fun. Besides, trying to explain the plot of a Terry Pratchett novel is a fool’s game.

** Popular reasons include following/searching for her husband, lover or brother, heartbreak, patriotism, revenge for losses incurred, and just because.

*** How on earth did they pull it off? I realize that a not-particularly curvy woman could bind her breasts and stuff a rolled-up sock in her breeches and pass as a teenage boy for an evening, assuming no one noticed the lack of an Adam’s apple. A recent book on the subject argues that once the Mongols introduced the concept of trousers to the world the total separation of male and female dress helped: the eye saw pants and thought male. But surely the lack of privacy in an army camp would lead to rapid exposure?

****One of my favorite examples from the American Civil War simply suited up again, changed her name, and re-enlisted after she was discovered and sent home.

*****At one point, 2000 cavalrymen disguised themselves as Dutch soldiers and tried to carry 50-pound bags of gunpowder through the lines to the besieged city. That’s a story for another day, but the short version is: BOOM!