Just so there is no confusion here, the several months ago referred to below happened in 2013. Over the next five (eeek!) weeks, as my book deadline draws nigh I may resort to re-running old posts more often than usual. 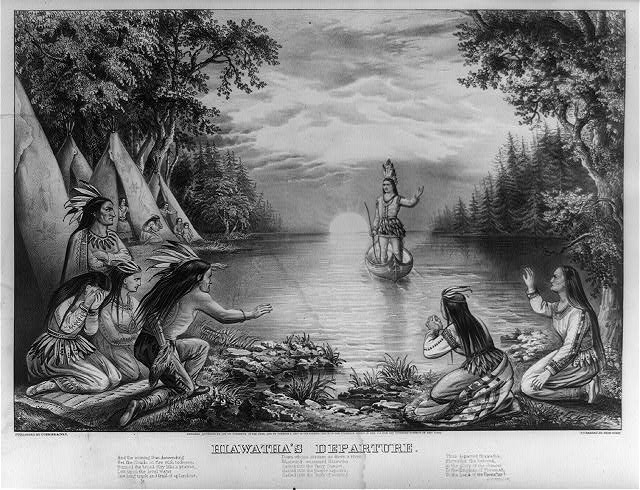 Several months ago, on a visit to Fort Michilimackinac, I was startled to read an exhibit sign that referred to Hiawatha as a real person.

As far as I knew, Hiawatha was the fictional hero of a Henry Wadsworth Longfellow’s poem: “By the shore of Gitche Gumee” and all that. On the other hand, as I thought about it I realized that much of what I know about Paul Revere also comes from a Longfellow poem. Perhaps Longfellow’s mythical Indian chief wasn’t so mythical after all and I was the only one who hadn’t caught on.

When I finally got a chance to poke around, I discovered that the question of Hiawatha, Longfellow, and reality is a complicated one. I immediately found that there was indeed an historical, or at least semi-mythical, Hiawatha. He was a leader of the Onondaga (or possibly Mohawk) tribe who was one of the founders of the Iroquois Confederacy in the 16th (or possibly 15th) century, depending on who you read. Further research, however, made it absolutely clear that the historical Hiawatha was not the subject of the Longfellow poem

In the 1850s, Longfellow set out to write what he described as an “Indian Edda“: an epic poem combining Native American themes with a structure and “primitive”* meter borrowed from the Finnish epic, the Kalevala.** He found his local material in large part in the ethnological writings of Henry Rowe Schoolcraft. An Indian agent in the western wilds of Michigan whose wife was half-Ojibwe, Schoolcraft collected Native America lore, was the first to translate Native American poetry into English, and was a serious student of Native American religious legends.

Longfellow loosely based his story on Schoolcraft’s account of an Ojibwe trickster-hero named Manabozho. Somewhere along the way he decided to change the name to Hiawatha, stating in his journal that it was “another name for the same personage”. *** Obviously the confusion was Longfellow’s, not mine.

I feel so much better.

* His term, not mine. If it makes the occasional Finnish reader feel any better, he also described the Kalevala as “charming”.

** Itself a nineteenth-century creation, assembled from pre-Christian Finnish songs and folk tales by folklorist Elias Lönnrot in the early 1830s. The twisty relationship between national identity and folk culture is fascinating–and a topic for another day.

*** To be fair, some of my sources blame this confusion on Schoolcraft. I’m not prepared to track this down further. Take your choice.