I know I’ve mentioned it before, but I owe a debt of gratitude to a group of authors (or perhaps a single author) whose name I don’t remember. She, he, or they wrote a series of biographies for young girls about smart, tough American women who sidestepped society’s boundaries and accomplished things no one thought they could accomplish. I grabbed each new volume as soon as it appeared in the school library. They were just what a smart nerdy girl needed at the time. They also put me one step further along the path to being a history bugg.* 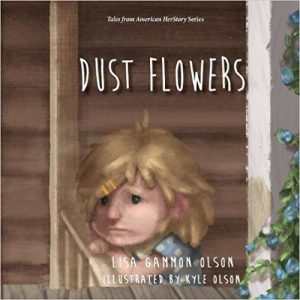 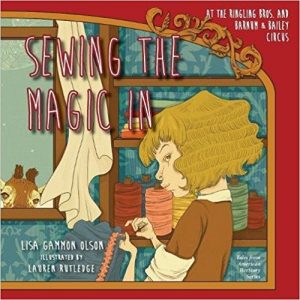 I thought of those books when two picture books by Lisa Gammon Olson came across my desk: Dust Flowers and Sewing the Magic In At the Ringling Brothers and Barnum and Bailey Circus. The books are the first two volumes in her Tales From American HerStory series, which she describes as “One moment in American History as seen through the eyes of one young girl.” In each book, Olson sets a young female protagonist in a vividly evoked historical setting that is central to the plot–the Dust Bowl of the 1930s in one case and the early years of the Ringling Brothers and Barnum & Bailey Circus in the other. Each book ends with an essay of historical nonfiction that gives more information about the historical world in which the book is set. The writing is lovely. The illustrations are charming. The stories are age appropriate for elementary school students but strong enough to grab me by the feels. I suspect that thirty or forty years down the road, there are going to be some grown women who remember Ms. Olson’s book as one of their first steps toward history bugg-hood.

I planned to give my copies to the little girls who live next door. Looking at them again, I’m not sure I can bear to give them up.

You can learn more about Lisa Gammon Olson and her books at http://lisagammonolson.com/

*I keep mis-typing buff. I think I’m just going to claim. Say it loud. Say it proud: I am a history bugg!