The image of pilgrimage came to mind again as soon as we began to visit key sites related to the Invasion of Normandy, beginning with the museum at Pegasus Bridge.

Pegasus Bridge, June 1944 (From the collection of the Imperial War Museum

The capture of Pegasus Bridge was a key objective in the first moments of the D-Day invasion on June 6, 1944. Here’s the short version:* Six Horsa gliders carried 181 members of the British airborne infantry, led by Major John Howard, from Dorset to Normandy, with orders to land, capture both Pegasus and the nearby Horsa Bridge,** and hold them until relieved. Pegasus Bridge was captured ninety minutes after the gliders took off from England. The operation’s success played a key role in limiting the effectiveness of the German counterattack.

The museum has the actual bridge, but as far as I was concerned the glider exhibit had the most impact.*** The exhibit juxtaposed an actual section of a glider fuselage from World War II with a full-sized replica of a Horsa glider, built according to the original plans. Just like the little two-man gliders that I enjoyed rides in several decades ago, military gliders were towed aloft by powered airplanes. Once they reached an assigned position and altitude, they were released and flown using rising and falling air currents. Unlike the gliders I knew, they were BIG: they were capable of carrying thirty armed paratroopers, a jeep, or an anti-tank gun. (Obviously I knew this in my head, but there is nothing like seeing things in person to give you a sense of scale.) They were also terrifyingly fragile, made of wood and canvas to conserve metal: in the months after the invasion, desperate French civilians broke up abandoned gliders for firewood and building materials. (And who can blame them?) 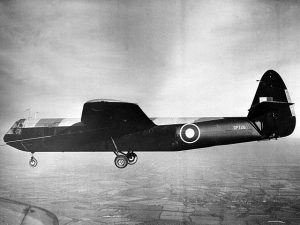 A Horsa glider under tow (Image from the Royal Air Force) 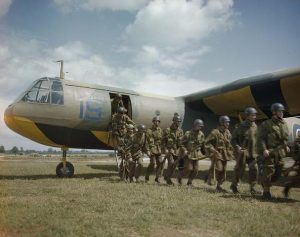 One detail in particular caught my imagination: Allied planes and gliders were painted with black and white “invasion stripes” on the fuselage and wings to distinguish them from German planes. Because of the need for secrecy, the order for the paint job, which involved thousands of airplanes, wasn’t issued until two days before the invasion was scheduled to begin. Because of the size of the job, civilians joined ground crews in painting the stripes. Some used brooms rather than standard painterly gear. Even those who had brushes didn’t have time to mask off the stripes. In many cases the paint was still wet when the aircraft took off.

* If you want to know all the details, I hear good things about these accounts of the operation: Stephen Ambrose Pegasus Bridge: June 6, 1944 and John Howard with Penny Bates. The Pegasus Diaries: The Private Papers of Major John Howard. I haven’t read either of them.

**The local names were the Bénouville and Ranville bridges. In honor of the operation, they were renamed Pegasus after the emblem of the British airborne division and Horsa after the gliders that brought the troops in. Similarly, the names by which we know the beaches on which American, British, Canadian and French forces landed–Omaha, Utah, Gold, Juno, and Sword–were their code names during the planning of the operation. I don’t know why this surprised me, but it did.  Perhaps because the accounts I’ve read of the invasion have only used the code names.

***The upside of the tour was that we had an excellent guide narrating the history for us. At some museums, including the museum at Pegasus Bridge, we also had a private lecture/tour/talk by a museum guide/curator/docent. The downside of the tour was that we often didn’t have time to look at museum exhibits in detail. It is quite possible that we learned more from the guides than we would have from the exhibits, but it was a bit frustrating for a hard-core museum fan.